Poor Nancy subjected herself to an interview for Tattered Pages, and what a trouper for answering all of my questions -- not to mention she brought us a fabulous excerpt from Monogomy Twist!
Thanks for being with us today Nancy! To start things off, tell us how your writing career began. 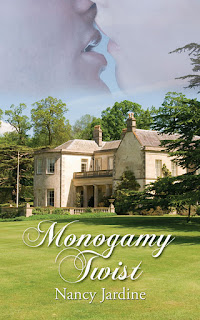 Blurb:
Luke Salieri thought he'd seen everything. But when he inherits a dilapidated English estate from a woman he's never heard of—and with quirky conditions besides—it’s a mystery he wants resolved immediately. There must be a woman out there who can meet his needs. But how far will he have to go to persuade her? Lucrative employment for a whole year? The job of researching the old house and its fantastic contents is enticing – but Rhia Ashton can’t see herself living with gorgeous Luke Salieri and not wanting his body as well. Can she live and sleep with him for a whole year and then walk away? Rhia has her own ideas about what will make it worth her while.
Posted by AJ Nuest at 5:30 AM

Morning AJ. Wow, did I answer all that? Nice to be with you today. I'll be popping in an out for a while. See you!

Hello ladies. Great interview.
Every time I visit AJ's blog I find a new book I must have. I know what I'm asking Santa for Christmas.

Congrats Nancy on the new release.

Hey Y'all! Not sure how much typing I'll be doing today. Got up, was washing the dishes and sliced my hand pretty bad. Grrr... Hello Monday morning!

I'm glad you're here with me today, Nancy! Love the interview!!

Fun and interesting interview Nancy! I got a nice chuckle.

Thanks for bringing out the fun side AJ. :)

Hello to Wlynnechantale and Calisa! Glad you enjoyed it. AJ, I hope your hand feels better and I'm glad I'm writing this AFTER I cut up the veggies for my chicken broth! Need a 'warm me up meal' later since it's a really windy cold day here today.

Hi Nancy and AJ! It's always great to learn more about Wild Rose Press authors. Loved the interview and excerpt, and AJ, you manage to make these interviews very personal. I feel as though I know Nancy a bit better now, even though she's all the way in Scotland and I'm here in California!

Glad you dropped in Lynne, and AJ definitely has a knack for it! (She makes you want to divulge more than you think you did!)

Gosh, Nancy.
It must be exhausting being you. I'm always impressed by women who can juggle so many balls and make it look easy. Love the excerpt and sharp dialog. My TBR list is busting out of the bookbag!

AJ, take it easy with those knives! Hope you heal quick.

Thanks Mac! It all depends on the priorities at the time. Glad you dropped in.

(I'll take this opportunity to ask if you're okay AJ?)

Oy, what a day! The hand is sporting an obnoxious bandage, but at least the bleeding has stopped...that is, as long as I don't look cross-eyed at the darn thing. I'm so sorry I haven't been around more today, Nancy. I love all the comments, and you ladies are so sweet to say such nice things about the interview. Nancy is the best for answering all my questions!! Monogomy Twist is definitely getting added to my TBR list! The minute I get my Kindle, Amazon isn't going to know what hit them! Big hugs everyone, and thanks so much for stoppin by!!

Thanks for having me on the 28th AJ (now 29th for me!) and best wishes for a speedy recovery. It's only when you lose the use of your fingers/hand you realise just how much you actually DO use it!
Slainthe!