Four Days and Counting for Surrendor to Honor!

I'm so happy to have Jannine Corti Petska with us today at Tattered Pages, celebrating her upcoming release of Surrender to Honor, the second book in her Italian Medival Series, coming out November 25th from THE WILD ROSE PRESS! 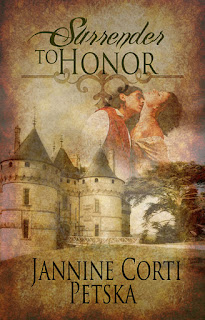 Prima Ranieri seeks retribution for her family's death and loss of home and land. Her plans go awry when the heir to the powerful Massaro family returns home. After only one glance, Prima's attraction to him undermines her furor toward those she blames for her plight.
After a fifteen year absence, Antonio Massaro returns to Palermo to find a war raging between his family and the evil Falcone. His refusal to accept his rightful position as the head of the Honored Society carries serious consequences. The welfare of the people of Palermo is at stake. But one look at the beautiful woman Prima has become costs him his heart. She's a deadly distraction...one that jeopardizes her life as well as his own.
Excerpt
Prima and Antonio are out for a pleasure ride and stopped in an orchard. Prima sets Antonio straight on the matter of her marrying.
“Think you age is on your side?”
She bristled. “I am not yet beyond marriageable age, or hindered like an old hag. But do tell, why must I have a husband?”
“You need a man, Prima, for you are like a wild horse before it is captured and tamed.”
“Such an insult! I’ll not be compared to an animal. And neither must I be captured or tamed.” She jerked on Amica’s reins, startling the horse. Antonio held the leather lines, preventing the horse from bolting.
“You act as if you are the only person ever to lose family. This bitter revenge you carry will one day turn you into a mean and spiteful old woman. Give up your fight. Marry and have children.”
“And bring them into a world of greed and senseless killing? I’ll not birth a son who is expected to rule and dominate solely because he is a man. And I’ll not birth a daughter who will be forced to bend to a man’s will simply because she is a female.
Marriage is not a path I favor. I want the freedom to choose how I ride a horse and to decide on the clothes I wear.”
“Those ideas will bode ill for you, Prima. You alone cannot change a society.”
“No, but I alone can choose my path in life; and no man will ever take that away from me.” 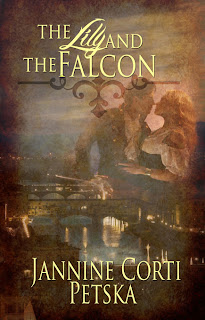 Blurb for Lily and The Falcon (Book I):

Bianca degli Albizzi is outraged when sworn enemy Cristiano de' Medici asks for her hand in marriage. With her father's blessing, she weds the handsome warrior to end the war between Florence's two powerful families. But headstrong Bianca vows to teach her husband that loyalty cannot be bought...not even by seduction.
Cristiano, a well-known warrior with the wealth of a king, could have any woman he desires. But for the sake of peace he ends up with a defiant bride who awakens his deepest passion. Her vengeful scheming puts them both in peril, but is he prepared to sacrifice his life to safeguard the woman who has stolen his heart?

In this scene, Cristiano and Bianca are betrothed and are out for a stroll with Cristiano's cousin and Bianca's sister as chaperones. The reference to the harlot's hose goes back to when he rode out of Florence to accompany Cosimo de' Medici to Padua, where he will be exiled. Cristiano had been stabbed in arm.
“Have you thought of me during my absence?”
“Surely you jest!”

“Then you have forgotten that I wore the harlot’s hose about my arm as I rode out of Florence?”

Bianca stopped abruptly, sputtering in exasperation. She paced two steps forward, two steps back, then whirled on Cristiano with eyes flashing. “You are undyingly arrogant.”

He simply shrugged, as if she had given him a compliment instead of an accusation on his character.

“Know you I would have preferred wearing your hose?”

Bianca blanched. She glanced about hastily as she prayed no one else had heard his ungentlemanly wish. It didn’t help that both Niccolo and Francesca seemed to find the comment amusing. Bianca raised her chin and directed her hostile gaze at the shine in Cristiano’s eyes.

“Is it your practice to wear women’s hose?” she asked pointedly.

Cristiano threw his head back and roared. When at last he contained his mirth, he replied, “Maiden, you humor me. I thank you.”

“Thank me not, my lord,” Bianca said, her mouth tight. As she flounced off, his iron grip yanked her back, forcing her to his side. They began walking again. Now and then he’d chuckle, deepening the color in her cheeks. She was surprised when he stopped and turned to look at her. Niccolo and Francesca went on ahead.

“Bianca, would you willingly marry me if I were not a Medici?”

She let her gaze sweep up the length of him and realized he was anxious to hear her response. Sighing, she replied, “Mayhap one day I would.”

“I am only in my eighteenth year, my lord, and have years left to be free from one man’s rule.”

A new dawning came to light from her honesty. “Are you afraid you will lose your freedom?”

At the entrance to an alley behind the bank Cristiano owned, he took Bianca’s hand and pulled her around the building. Backing up to the wall, he brought her into him, cradling her cozily between his hips.

“This is improper,” she protested.

“I care not, so do not burden me with propriety. I mean only to set your mind at ease, Bianca. The freedom you desire need not be lost to you Understand the importance our marriage will have on the Medici and the Albizzi.” He broached the subject, ever aware of her mistrust of his lineage. “We must proceed for the sake of Florence.”

“Mayhap you feel indebted to Florence, and I should as well. But marriage should be for lovers.”

A devil’s gleam came into his eyes. Bianca leaned back, but he pressed her into him, imprisoning her to his length.

“Then lovers we shall be,” he whispered. His mouth descended like a swooping hawk, closing over her lips in bridled passion. Carefully, he controlled his desire for her, restraining himself commendably, though he doubted she’d agree. Her inexperience enthralled him, and he wished he could understand how his intimate caresses affected her. Cristiano embraced her, glorying in the feel of her soft body stretching up his, thrilling to the knowledge that soon she would be his woman, no matter that Albizzi blood flowed through her veins.


And here's a little about Jannine:
Jannine Corti Petska was born in but raised in . Her parents' first language was Italian, and Jannine was raised in an environment. She began writing romance novels when her three daughters were young and she was a stay-at-home mom. In-between writing and caring for her family, she tutored Italian, Spanish, German, and English as a Second Language at a local college. Although she loves placing her stories in medieval , she has also written romantic tales of the cowboy in the American West. To find out more about Jannine, please visit her website. www.jcortipetska.com
Posted by AJ Nuest at 5:30 AM

Great excerpts! Gonna add these to my TBR list. And LOVE the covers--so beautiful!!

Happy Release, Jannine! Hi AJ. What wonderful excerpts! I think I will have to get these! Ia dmire historical writers. Such research and knowledge of past eras...

Nice interview and a very pretty blog, ladies. Jannine, I look forward to your book release.

I'm sure you're very excited about your upcoming release. The covers and blurbs are quite lovely. Wishing you great sales.

Your writing is so richly authentic, Jannine. Nice post and I thank you for the opportunity to read your wonderful excerpt.

Your blog and stories sound exciting, Jannine. Thank you once more for sharing with us. Best, Joy

Amie, Calisa and Miriam:
Thank you so much for reading my blurbs and excerpts. This series is near and dear to my heart. I've been waiting about 14 years for book 2 to be published.

Vonnie, S.G. and Joy:
I appreciate your comments. Thank you for stopping by.

Jannine's novels are always compelling. Being part Italian and married to an Italian from Sicily, I appreciate her works set in Italy. They are unique, in part, because of that.

Just love the sound of this one, AJ and Jannine. The romance of Palermo is not something you would forget (I'm a lying tosser actually since my husband never took me there, BUT way back in '74, he did take me on a SURPRISE honeymoon to Venice, Florence and Verona) Romeo and Juliet..yep... ahem.. I even saw some statues as well! Regardless of that info which NOBODY else knows I think I will like this one. (TBR pile is 1 larger, yipee)

These sound wonderful! And such beautiful covers!

Great covers, Jannine, and I love the flow of the language in the dialog. TBR for sure.

Ann, thanks for the compliment.

Nancy, lol, of course we wanted to know that info.

Sarah and Mackenzie, thank you for the compliments on my covers. Jimmie Thomas is on the LILY cover.

Ladies, thank you all for taking time out of your busy lives and stopping by. Glad you liked the excerpts.

AJ, it was a pleasure being your guest today. Thank you for the wonderful posting of my excerpts and all the rest.

Thanks, everyone for stopping by to visit with me and Jannine today! I'm sorry I didn't get the chance to comment until just now. How can one person spend 14-18 hours at the computer EVERY DAY and never be caught up? Can SOMEONE please explain this to me?? Jannine I loved having you as my guest. You are a supa-star! Can wait for the next in the series and here's to a boatload of sales!! Cheers!