Hold on to your hats because I have the hilarious Nic Tatano visiting today, whose answers to my interview are waaaay better than the questions. If you like romantic comedies, you're going to want to MARK YOUR CALENDARS for August 29th, the date Wing Girl releases from HarperImpulse UK! I honestly can't wait to read this book!!!

Welcome to Tattered Pages, Nic. I'm psyched you're here!! Why don't we start by telling the readers how your writing career began.


I'd written for my college newspaper and knew I wanted to write for a living, but I knew you couldn't start a career as an author right out of the gate, so I got a job as a reporter for a local newspaper. I later moved into radio, working as a copywriter (I once wrote a commercial for a funeral home), and eventually got into broadcasting where I spent many years as a television reporter. When I reached my on-air expiration date and moved behind the camera my muse got bored since I didn't get to tell a story everyday, so I started writing fiction.
But my big problem was that I had gotten so used to "writing to the video" in television news that my first novel had no setting. I had always let the video and sound tell that part of the story, since the viewer can already see it. So I had to learn to write differently.
My very first sale was a short story to a Star Trek anthology.

Oh snap! Seriously? I am a HUGE trekkie. I think you just became my new hero! LOL So, I know Wing Girl is a romantic comedy, but do you write in any other genres?

While I also write thrillers and young adult novels, I stick to RomComs when it comes to romance. Probably because I enjoy romantic comedies in the theater and writing humor comes easily to me. The other reason is that I had so many disastrous first dates that I've got a lot to draw on when starting a RomCom. And since I have a great marriage I have no problem writing the happy ending.

Aw, that's awesome! Okay, so Rom-coms can sometimes get spicy. What's you're overall stance on heat level? Should readers expect that bedroom door to be open or closed in Wing Girl?

If it gets any warmer than seventy-four degrees, I'm uncomfortable with both. And the door stays closed to keep the cat out. (I'm sorry, I couldn't resist. The snarky gene is dominant in my case, and the question was a hanging curve ball over the middle of the plate. I had to swing at it.)

LOL! This is exactly why I was so excited to have you here today! You keep me laughing!! Let's talk characters for a second. Of the ones you’ve created, which one is your favorite and why?

That's a tough one, but my main character in Wing Girl, television reporter Belinda Carson, is probably my favorite because I really "got in her head" while I was writing. I actually found myself thinking like her when I would get up and still be half asleep. (When I would fully awaken I would realize I was not a hot thirty year old redhead.) She's the smartass spunky sister I never had, a take-no-prisoners, kick-ass reporter. But off-camera her dating skills need a serious makeover. She's such a disaster with personal relationships (like a certain person I saw in the mirror when I was single) you can't help but root for her to find Mister Right. But the girl needs a social GPS to find him.

Oh my gosh, I LOVE that description! Stupendous! What's your take on the recent influx of writers moving to self-publication. Have you ever considered that route in your writing career?

I've self published a bunch of short stories, a few novels, and some journalism textbooks. This, of course, leads to "check your Amazon sales ten times a day" syndrome, and can actually make your day when you make a thirty five cent commission. You can't put a price on having your work validated by the fact that someone actually spent money to read your work.

And a writer always hopes someone will discover that special work. In my case it's a novel called "The End" which is about a reporter who gets the exclusive of all time: an interview with an angel on Judgment Day.

Ahhh...okay, that sounds completely awesome. I need to go buy that book...like right now. LOL What's your current project? Got anything brewing for the future?

I'm halfway through another RomCom titled "It Girl" in which a television reporter gets a dream network job anchoring a morning show.... and it screws up her personal life so bad she does everything she can to get fired. I know what the ending is but I have no earthly idea how I'll get there. I love working without an outline and winging it because I like to be surprised as much as a reader.

I love that too. My characters always take me places I never knew we were going until we get there. What about in between projects? After finishing a manuscript, do you take some time off or dive right in to the next story?


I take a break. I have to get the characters out of my head before I move on to a new set. And I'm such a "streak writer" (I write very fast when I'm in the zone) that my tendonitis flares up. So I go on a chocolate bender while watching science fiction movies and old episodes of Star Trek. (The original series with Captain Kirk, not The Next Generation. I mean, seriously, if you write romance you can't identify with Captain Picard. The guy had less sex than Spock, who at least fired phasers every seven years.)
ROFLOLOL! Hey, I love Jean-Luc...as Professor X, that is.

I just realized I mentioned Star Trek again, so you probably think I'm a sci-fi geek. Mea culpa. I've been to plenty of Trek conventions but I do not have a Starfleet uniform hanging in my closet.

Okay, ahem, back on point. What’s on your nightstand (or downloaded onto your Kindle) right now?


I don't have a Kindle, so the nightstand is occupied by The Zero Game, a political thriller by Brad Meltzer. Along with a bottle of Tums.
LOL! Right. Who is your favorite author and why?


Stephen King. I love his unique voice and the way he can turn ordinary people into something special. Someone could give you a book, not tell you who wrote it, and if it was a Stephen King novel you'd know immediately simply from the voice. The Stand is my favorite book of all time, though his recent 11/22/63 was pretty darned good as I love time travel stories. I like his early books the best. Reading Pet Sematary when you have a cat will make you go to bed with the lights on.

I have an entire bookcase filled with Stephen King novels. He never disappoints, does he? My favorite is The Dark Tower Series. Epic fantasy. Epic. Got a favorite cocktail?

Rum and whatever. And the glass must contain more of the rum than whatever. Umbrella optional.

Duly noted. *AJ grabs a pen and furiously makes note -- buy rum for Nic.* What about hobbies? What grabs your fancy besides writing?


Cooking. I'm Italian and spent my high school and college years working in my father's delicatessen, so it comes naturally to me. I learned a lot from my grandmother who grew up in the Great Depression; my job was to make the bread crumbs by rolling stale bread with a glass milk bottle. She would never waste food, a trait I still carry today. By the time I was seven I could cook for myself.


None of the recipes are written down as they're all in my head, but I will share one tip; meatballs need to be made with a two-to-one ratio of ground beef to ground pork. Without the pork to provide the flavor to both the meatballs and the sauce, you're eating hamburger and ketchup. Lightly fry the meatballs halfway in olive oil, then let the heat from the sauce cook them the rest of the way. It will pick up the flavor.


That is AWESOME! My daughter and I actually make our own sauce from tomatoes in the garden. We started last year because we had such an abundance of them, I didn't know what else to do. The sauce ended  so delicious, I'm stuck making it again this year.  What about pets? Do you share your living space with any four-legged friends?


I've always been a cat person, and all of my cats have been orphans or strays. They make the best pets. Our current house overlord is a tortoiseshell tabby named Gypsy. I was eating lunch one day and saw her in the window, looking hungry, so I gave her half my sandwich and she's been with us ever since. Turned out she's already fixed, so she either ran away, got lost or was abandoned. She's a very sweet cat, though getting her in the pet carrier to go to the vet requires oven mitts. Gypsy is very much a daredevil, hanging out on the roof... or the chimney... of our two story house.


She also has a bit part in Wing Girl. Most of the cats I've had in the past appear in my work.
Oh, that's cool! I love writing pets into stories. Thanks so much for being here today, Nic! And now for a sneak peek inside Wing Girl! 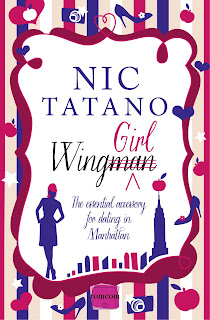 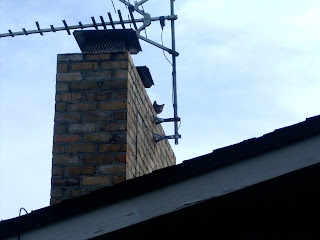 I've always been a writer of some sort, having spent my career working as a reporter, anchor or producer in television news. Fiction is a lot more fun, since you don't have to deal with those pesky things known as facts. I write RomComs for HarperCollins, along with thrillers and young adult novels.
I spent fifteen years as a television news reporter and anchor. My work has taken me from the floors of the Democratic and Republican National Conventions to Ground Zero in New York to Jay Leno's backyard. My stories have been seen on NBC, ABC and CNN. I still work as a freelance network field producer for FOX, NBC, CBS and ABC.
I grew up in the New York City metropolitan area and now live on the Gulf Coast where I will never shovel snow again. I'm happily married to a math teacher and we share our wonderful home with our tortoiseshell tabby cat, Gypsy.
﻿
﻿
﻿THANKS FOR VISITING! STAY TUNED FOR MORE FROM HI UK TOMORROW WITH AIMEE DUFFY!
XO AJ XO
﻿
Posted by AJ Nuest at 12:01 AM

Awesome interview, ladies. I'm a new author at RI. So new the contract hasn't been signed yet. I've enjoyed getting to know some of the RI authors. What an interesting and talented group of writers. Much luck to you, Nic. I loved reading your excerpt.

I'm looking so forward to this read! :) Great post, Nic and AJ!

I know. I can't wait for this one either!! It's gonna be AWESOME! Thanks for being my guest today, Nic!