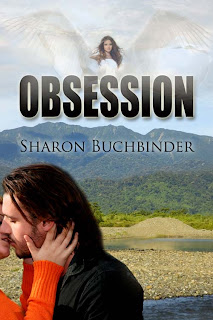 Over the past three years, I've been researching, writing, and rewriting my paranormal romantic suspense, Obsession, which is coming soon from the Wild Rose Press.  I also searched for songs to inspire me to help me dig deeper into the emotions of the characters.


Obsession is the story of a frantic mother, Angie Edmonds, who is forced to work with a Mexican drug lord, Alejandro Torres, because her son has been abducted by a cult leader who believes the child is the Chosen One, I had a lot of choices in music to accompany me on my writing journey.

The book opens with a near-death experience and Angie's encounter with a guardian angel.  U2's  If God Will Send His Angels made this scene come alive for me, as did Alanis Morissette's Uninvited. At the end of the book, Angie is calling for divine intervention, which goes well with the Australian band Real Life song, Send Me an Angel.

When Angie discovers her son is abducted and taken to Mexico by her cult leader father, the bottom of her life falls out. Peter Gabriel's I Grieve said it all for me.  Angie's is not going to let this pass, she's not going to lay down. She will pick up and carry on, do whatever she must do to rescue her son, even reaching out to the biggest drug lord in Mexico for help.

While fighting for her life, she calls out for help and Alejandro, the Mexican drug lord, appears. Is he evil or is he a hero? Bonnie Tyler's Holding Out for a Hero felt right for this critical first meeting scene.

One of the interesting types of music I found along this journey was Norteño music, born in northern Mexico, but played in many other locales. The accordion is one of the key instruments in this style. The pace ranges from "smooth" jazz-like music such as this Groove Norteño music video, to music that reminds me of polkas with lyrics about the Crime of Chihuahua,  and rhythms to get you up and dancing in Copper Canyon.

Music was my muse for much of Obsession. Here's my playlist with links to YouTube videos. I hope you enjoy it as you read the book. What songs do you like for invoking your muse or to read by?


Great News!  Obsession is available as a FREE DOWNLOAD June 4-8, 2013!
A desperate mother...
A Mexican drug lord...
A dangerous obsession.


A year after a barbaric childbirth, complete with a near-death experience and an encounter with her guardian angel, Angie Edmonds is just happy she and her son, Jake, are alive. She's finally in a good place: clean, sober, and employed as a defense attorney. But at the end of a long work day, she finds herself in a parent's worst nightmare: Jake has been kidnapped and taken across the Mexican border by a cult leader who believes the child is the "Chosen One."

Stymied by the US and Mexican legal systems, Angie is forced to ask the head of a Mexican crime syndicate for help. Much to her chagrin, she must work with Alejandro Torres, a dangerously attractive criminal and the drug lord's right-hand man. Little does she know Alejandro is an undercover federal agent, equally terrified of blowing his cover—and falling in love with her.
~~~~~~~~~~~

After working in health care delivery for years, Sharon Buchbinder became an association executive, a health care researcher, and an academic in higher education. She had it all--a terrific, supportive husband, an amazing son and a wonderful job. But that itch to write (some call it an obsession) kept beckoning her to "come on back" to writing fiction. Thanks to the kindness of family, friends, critique partners, Romance Writers of America, and Maryland Romance Writers, she is now an award-winning author published in contemporary, erotic, paranormal and romantic suspense. When not attempting to make students, colleagues, and babies laugh, she can be found herding cats, waiting on a large gray dog, fishing, dining with good friends, or writing. You can find her at www.sharonbuchbinder.com

I'll have to listen when I have time, Sharon. As for the book- I'll go look it up on Amazon. None of the links you have here work for me. They go nowhere. lol

Hi Calisa--Sorry the links don't work. It should be easy to find, as long as you include my last name. Seems a lot of authors were obsessed with the title Obsession! LOL! Thanks for stopping by!

Thanks for having me here, AJ! Love your sparkling stars! I feel like I'm a celebrity! LOL!

I already have OBSESSION on my Kindle and can't wait to start on it. The premise sounds wonderful!

I always shiver when someone mentions accordian music. I got one for my twelfth Christmas when what I really wanted was a pair of skates. I hated that instrument everyday of the three years I took lessons. I kept praying God would get me away from the Austrian instructor, who was too touchy-feely. My boobs began to grow and got caught in the billows every time I tried playing music, so I had to give it up. Proof positive God answers prayers. ;-)

What a super idea, to provide a playlist for the book, which sounds so intriguing, BTW. Best of luck with it, Sharon.

Vonnie what a funny story! Accordions were big wher I grew up, large Polish population lots of polkas!! :)

And thank you for buying Obsession, Vonnie!

Hi Barbara thank you for reading and commenting. Music helps me get into the writing zone and pick where I left off, too. It took me 2 years to research and 2 years to write Obsession, so I heard these song a LOT. :)

The premise of your story sounds chilling! I've tweeted the Freebie day. :)

Hi Karen--Thanks for stopping by, commenting, and tweeting! :)

Holy cow, I was FINALLY able to get on. Stinkin computer. Stinkin Blogger. LOL Sharon, I'm thrilled to have you and your fantastic book at Tattered Pages! I have my copy as well! Whoot! I truly can't wait to read it. Thank you, thank you so much for being my guest and good luck with your free days! XOXO

Great playlist. I love most of these! I can't listen to music when I write because I start singing along or zoning out.

Hi AJ! Thanks for having me here today. I hope you enjoy the read!

Hi Lilly--Thanks for stopping by! Some songs, especially oldies, can do that to me, too. I need songs that speak to the story as I write. ;)

I found your blog through the WLC Blog Follows on the World Literary Cafe. Great to connect! I'm at www.sdkeeling.com. I look forward to reading your posts!

Hi Sharon--What a lovely name! ;) Thanks for posting and saying hello. I hope you downloaded a FREE copy of Obsession for yourself!

The book sounds great! Will head over to Amazon now. Best of luck!

Thank you Kathryn! I hope you enjoy the read!