That's right, folks!
Only seven days until the release of Rowena's Key from HarperImpulse UK!
I'm thrilled to launch The Golden Key Chronicles! 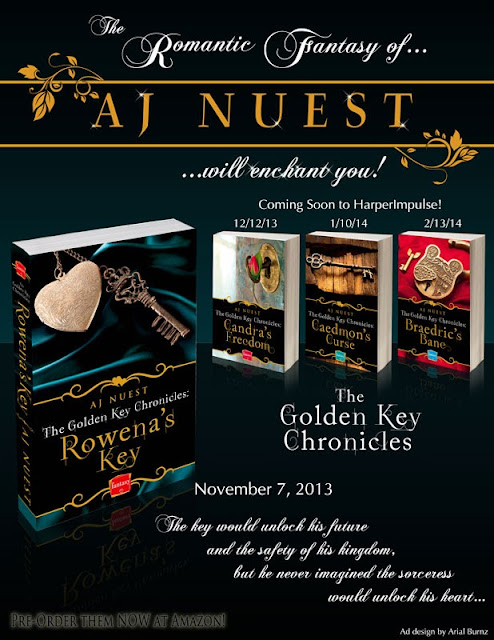 To celebrate (and whet your appetites), I'm posting an excerpt from Book I of the series. I hope you enjoy!

This scene is taken from when Rowena and Caedmon first meet, each of them standing on opposites of what she believes to be a computer monitor...

﻿
What was with this guy, with his sable, shoulder-length hair and closely trimmed beard? His white shirt was best described as puffy, with ballooning sleeves and wide, ruffled cuffs. The front hung open, exposing the muscled contours of his beveled chest, the roughly stitched tails skimming the thighs of his fitted, leather…breeches?

Oh, God. She chuckled and shook her head. He had to be one of Ollie’s theater friends. Bravo for his stunning portrayal of a swashbuckling swashbuckler. Too bad that also meant he was gay.
He lifted the sword in both hands and turned a broad shoulder toward the mirror, the taut planes of his stomach easing in and out with each controlled breath. A trail of dark hair arrowed down inside the waistband of his pants, where his perfectly cupped manhood bulged for her inspection. Oh yes, too bad indeed.
“If you scheme to divert me with your alluring attire and guileless stare, I’ll have you know an abundance of courtesans await my nightly dalliance. I am not so easily swayed.”
Rowena inched a slow perusal of the delectable landscape back up to his face. His dark eyes glittered in the candlelight, and she mirrored his arched eyebrow. “Oh, really?”
Perhaps she’d pegged him wrong. Wouldn’t that be a treat?
She glanced down at her gauzy nightgown, the flickering fire doing little to cover her rosy nipples, pert in the chilly air. But he invaded her space with this theatrical exploit of his. What else did he expect her to be wearing, showing up like this in the middle of the night?
“You’d better be careful.” She wagged a finger at him. “Or I’m apt to get busy with some serious despoiling all up in here.”
“Enough, Sorceress!” He lunged forward, the blade of his sword slicing the air when he aimed the silver pommel straight at the screen. “Let us be done with this trickery. Name your demands before I smash the glass and ensnare your bewitching guise for an eternity.”
A low laugh tickled the back of her throat. Talk about living a role. Sheesh, take the drama down a notch. She stepped close and ran a hand around the edge of the frame. The signal had to be streaming live, what with his ability to interact with her, but there wasn’t a wire or a microphone, heck, not even a screw in sight.
She stood back and crossed her arms, shifting her weight onto one hip. Okay, she would bite, as long as Ollie promised this whole escapade wouldn’t end up on YouTube.
“Fine. You’re extremely gorgeous and very talented. Seriously, you’ve got the whole English accent down perfect. And while I appreciate all the work that went into this little program, it’s about two in morning and I have to get up early for work. Tell Ollie I said good show, props to the production crew and I’m nominating the wardrobe guy for an Oscar.”
There. That should call the evening a wrap. She grabbed the edge of the door and swung it closed.
“You wear Rowena’s Key.”
She froze…and then tentatively eased the door back open.

Be sure to head on over Facebook and join in the celebration --> HERE. The party begins Thursday, November 7th at 8:00 am with prizes and goodies galore...and man-candy. We gotta have man candy! Whoot!

Oh yeah!That's good! Did I say good? I meant awesome! Really? I have to wait until the 7th? Oh, bother!! So excited for your release, AJ!

Dixie you are so, so good for me. Truly, I could not have asked for a better writer friend. Thank you so much for sharing in my excitement!!! xoxoxo

I found your great blog through the WLC Blog Follows on the World Literary Cafe! Great to connect! Please see mine: http://flirtyandfeistyromance.blogspot.co.uk