Greetings Everyone! I am sooooo excited because today I'm hosting one of my most favorite authors EVER! Dixie Lee Brown is here to tell us a little bit about herself and her lastest release, When I Find You, Book Two in her Trust No One Series! Whoo Hoo!! (I am so digging this cover!!) 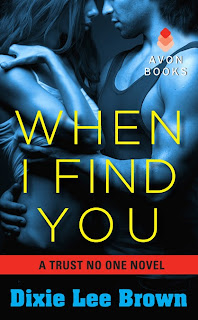 Hello! I’m so excited to be here! Thanks so much for having me today, AJ, and for helping to celebrate the release of my new book. Did I mention that I’m pretty excited?


I’m thrilled to have you, Dixie! I recently finished When I Find You and WOW! It blew me out of the water!! I am completely hooked on this series. And Walker. I love Walker. *AJ shakes her head and clears her throat* So, tell us how your writing career began.
I believe my writing career began the day I was lucky enough to be picked up as a client by Dawn Dowdle and the Blue Ridge Literary Agency. Although I have an immense amount of respect and admiration for writers who go the indie publishing route, I just always knew I wanted to go with an agent and a traditional publisher if possible. I never dreamed I would end up being represented by THE BEST agent ever, or that she would secure a fabulous contract for me with Avon Impulse/Harper Collins for a three book romantic suspense series. I’m so excited, because the second book of that series, WHEN I FIND YOU, published just ten days ago!


Whoo Hoo! That’s so exciting!! I often find inspiration in the stories I read. What’s on your nightstand (or downloaded onto your Kindle) right now?
I’ve got so many things on my Kindle waiting to be read! I’ve got AJ’s Jezebel’s Wish (*AJ slaps a hand to her forehead and shakes her head*); The Seduction of Emily and 16 Marsden Place both by Rachel Brimble; While You Were Dead by CJ Snyder, and probably about fifty or sixty more. There should be a group for people like me. “Hi, I’m Dixie Lee Brown, and I’m a Kindle addict!” There’s definitely no dust on my Kindle—unlike my nightstand!


I know. Dust has a life of its own which I’ve become a professional at ignoring. What’s your favorite cocktail?
I enjoy a good margarita—just not often enough!


Mmm… Me too. Any pets?
I have two small dogs. Kaycee is a 7 year old Maltese. Reba is a 4 year old Maltese/shih Tzu cross. I’m that crazy dog lady who thinks of them as kids, talks to them, and would never consider missing a vet appointment. In return, I get their loyalty and unconditional love, and some days it takes their enthusiasm to get me started. Not a bad trade off.


Of the characters you’ve created, which one is your favorite and why?
My favorite would have to be Walker, the hero of my new release WHEN I FIND YOU. Walker is a tough, cynical, ex-Marine with PTSD syndrome, experience he’d rather he didn’t have, and a bad attitude. When it comes to rescuing the girl from the bad guys, however, there’s nobody better—plus he’s pretty darn sexy.


AGREED! I just LOVE that guy. I can’t get me enough WALKER!!
And now for a sneak peek inside...

Darcy Maddox’s quiet life as a nanny is turned upside down when she learns her employer is linked to the mafia. Rather than quitting, she chooses to stay and ignore the truth. Now, she’s fairly sure her boss is dead…and the murderers are after her. A complete stranger tries to kill her. Another dogs her every footstep. Is he friend or enemy? Dare she trust him?

When Walker is asked to track down the nanny and stash her someplace safe until the U.S. Marshals can arrange for her protection, he’s sure she’ll be more trouble than she’s worth. He has no idea. First, he has to find her. Then he must convince her he’s on her side, but that proves more difficult than he ever imagined. Walker doesn’t give up easily, especially after the woman clubs him and leaves him for dead. He doesn’t care how attracted he is to her. He’ll find her, and when he does, it’ll take more than the mafia to tear him away.

﻿﻿﻿
“I don’t need your help.” She raised her voice over the steadily rushing water.
Walker snorted a laugh. Did she really not know how much trouble she was in? “That bear would have ruined your evening if I hadn’t been around, and that guy back there by the car would have killed you.”
She jerked her head toward him but lost her balance and brought her hands up to steady herself. “He couldn’t do it, so now you’re taking over the job?”
“Hell, if I wanted you dead, why would I get between you and that bear? Why wouldn’t I just walk away and let your friend shoot you in the back? Think about it, Darcy. You’re a perfect target standing out there on that rock. No way could I miss.”
“Death isn’t necessarily the worst thing that can happen to a woman.” Her voice was thick with fatigue and despair.
The truth in her words made him burn with anger, and he didn’t know what to say that would convince her she could trust him. If he were in her position, who would he trust?
“If you’re telling me the truth, just go away. Leave me alone.”
He shook his head. “I can’t do that. You’re in a tough spot right now. I’m not convinced you’ll stay dry. Even if you do manage to get across, or back to this side, what then? Can you get out of here by yourself…in the dark? Do you even know where you are?
“How do you know my name? I saw you watching me at the airport.”
“The U.S. Marshals Service sent me to find you and stash you someplace safe until they get this Johnny Fontana situation sorted out.”
She looked over her shoulder and met his gaze, hope shining in her eyes for the first time. “Show me your badge.”
Walker spread his hands wide. “I said they sent me—not that I’m a marshal.”
Damn it! She wanted to believe him—he saw it in her face. Instead, she turned back, dismissing him and everything he’d said. For a moment she stood there, silent, not moving. He watched her body language for a clue to what she planned. When she crouched and shoved herself forward, there was nothing he could do.
~ * ~ 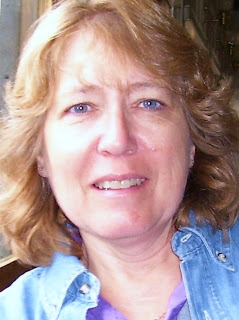 DIXIE LEE BROWN started writing romantic suspense nearly twenty years ago. Then life took a few unexpected turns, and the writing career was put on hold in favor of starting a new life and a new job. One’s passion is not easily forgotten, however. Recently, Dixie started writing again—a YA novel—but, before she could finish, another idea pushed to the forefront and wouldn’t go away until a full-fledged novel was completed.


That idea became All or Nothing, first book in the Trust No One series. All or Nothing placed third in the 2011 TARA Contest (Tampa Area Romance Authors) in the romantic suspense category.
Dixie now lives in sunny Central Oregon with two small dogs and a cat for company while she writes the third book of the Trust No One series. When she’s not writing, she enjoys reading, movies and trips to the beach.

Here's where you can find Dixie on the web!
Website: www.dixiebrown.com
Facebook: https://www.facebook.com/pages/Dixie-Lee-Brown/311618418919108?ref=hl
Twitter: @DixieLeeBrown
And HERE'S where you can find Walker:  Amazon / Barnes and Noble / Google
Well...what are you waiting for! Go get a copy! LOL
Thanks for being my guest today, Dixie!!
XO AJ XO
Posted by AJ Nuest at 5:30 AM

Well from one crazy dog lady to another, I'm so excited about your new release. the first in the series had me glued to the pages. Working my way down the TBR pile (between writing and reading, my head just might explode one day!) But maybe not...like dogs, you can never have enough books.
Enjoyed the post, Ladies!

Thanks, Sharon! I am super excited about this release! I know what you mean. I've had that head-exploding sensation more than a few times the last few weeks. (Takes a deep breath!)I went a little overboard once thinking you can never have enough dogs! But books...that's another story! Thanks for stopping by.

AJ - thanks so much for having me here today. Whew, it's exciting enough around here to really get that old heart rate up! Oh wait - that might have been the yummy pictures! Mmm..mm!

LOL! I'm thrilled to have you here today, Dixie! And Walker...I could go on and on. Suffice to say I think everyone in the world should read this series! Congrats on all your outstanding success. You totally deserve it!

HI Dixie!! (glances around) "Ah, where's Walker? I got my new lip gloss on and everything...Spritzed on some extra Obsession, too."

As you know, I loved this book. Ladies, if you haven't read it, don't deny yourselves this treat. While it's book two of the series, it's a stand alone. But, shoot, don't deny yourself the pleasure of "All or Nothing" either. Much luck to you Dixie! Whoot! Wait...that AJ is hiding Walker, isn't she? Darn her!

LOL Vonnie, didn't you see the pictures? He's up there...in all his fabulous glory. Not sure if he has time to actually visit, though. I think Joe may have him out on assignment...probably risking his life in some scary place. Dang that Joe anyway.

You know, Vonnie, I wouldn't put it past AJ to hide Walker at all! She seems a little...well...possessive! But then who wouldn't be?

Thanks for your kind words and your support (as always). And that new lip gloss looks good!!


In the name of God the Merciful We in the

services in all cleaning Katenziv in

apartments , boards and cabinets and

insects flying and crawling and rat

everyone because of the expiration of the