I'm totally psyched to have my friend and fellow author Ellen Mansoor Collier at Tattered Pages today, who brings with her a peek inside her latest release, Flappers, Flasks and Foul Play. I'm reading it now, and I'm here to tell ya' -- this one's a keeper! So, so good!
CHECK IT OUT BELOW! 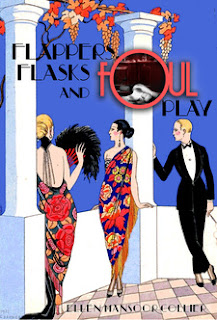 "Boardwalk Empire" meets "The Great Gatsby" in this soft-boiled "Jazz Age" mystery, inspired by actual events. Prohibition is in full swing in 1920s Galveston, Texas: the "Sin City of the Southwest." Jasmine Cross, a young society reporter, feels caught between two clashing cultures: the seedy speakeasy underworld and the snooty social circles she covers in the Galveston Gazette.

During a night out with her best friend, Jazz witnesses a bar fight at the Oasis--a speakeasy secretly owned by her black-sheep half-brother, Sammy Cook. But when a big-shot banker with a hidden past collapses there and later dies, she suspects foul play. Was it an accident or murder?

Soon new Prohibition Agent James Burton raids the Oasis, threatening to shut it down if Sammy doesn't talk. Suspicious, he pursues Jazz, but she refuses to rat on Sammy. As turf wars escalate between two real-life rival gangs, Sammy is accused of murder. To find the killer, Jazz must risk her life and career, exposing the dark side of Galveston's glittering society.

Excerpt:
A loud bang sounded, a crash, a door cracking. Heavy footsteps pounded down the stairs and three men in dark suits entered the Oasis, holding badges. Their guns raised high, the trio circled the room like Wild West lawmen. We had no place to hide. A stocky man shoved Dino against the wall and for once, he didn’t fight back. Sammy must have warned him to be on his best behavior. Frank crept towards the back like a spy, trying to disappear into the woodwork. I’d never been in a raid before, but I’d seen them on news reels. My heart throbbed in my chest as I braced myself for the worst: What if we all got arrested and thrown in jail?
“Federal Agent James Burton, Treasury Department. Don’t move and no one will get hurt!” yelled the tallest of the trio. Over six feet, he wore a fancy three-piece beige suit and felt hat. I didn’t know flatfoots got paid so well.

Cool as ice, Sammy sauntered out from the kitchen, smiling at the men as if they were regulars. “Welcome! How can I help you gentlemen?”

“You can tell us where you keep your booze,” Burton said, scanning the room.

“Booze? You’re in the wrong place, boys. All we serve here is good food and soda pop.” Sammy wiped his hands on a dirty red apron he’d thrown on for effect. “Hungry? How about today’s special—home-made spaghetti?”

“We need a drink to quench our thirst,” said Burton. “On the rocks, since we’re on duty.”

Sammy feigned surprise—not a bad job of acting for an amateur. “How about root beer or a Coke? The only cold drinks we serve here are soda pop. We’re bone dry.”

“That’s not what we heard—Mr. Cook, is it? We hear this place is full of hooch.”

I held my breath, trying to quell a bad case of the screaming meemies. How’d he know Sammy’s name? Who mentioned any hooch? Agent Burton and his men slid between the tables, his eyes dancing back and forth, studying each customer, as if memorizing their faces.

A burly cop in glasses pointed to an older bald man cowering in his chair. “You there! What’s that poison you’re drinking?”

“Looks like a cocktail to me.” The agent stuck his finger in the glass, tasted it, then threw it down. Glass splintered into tiny slivers as liquid seeped into the wood floor....

Dropping his friendly facade, Sammy marched over to Burton, his boots crunching on broken glass. “I told you it’s a diner, not a bar. Leave him alone. Who do you think you are?”

“Like I said, name’s Burton,” he said, as if talking to a dim-witted child. “I’m the new head of Galveston’s Prohibition enforcement office.” He held up his badge like a shiny trophy. The two men were polar opposites: With his tanned skin and thick honey-blond hair, Burton resembled a golden retriever ready to attack a Doberman. No contest, if you ask me.

“You’re wasting your time here. No need to harass my help or my customers.”

“Seems your customers must like to play rough.” Burton tapped his own cheekbone, indicating Sammy’s black eye.

I nudged Nathan under the table, impressed by Sammy’s bravado. But maybe this wasn’t the best time to question authority. His big mouth could earn him a fat lip.

“What’s going on?” I whispered to Nathan. My throat was so dry, I could barely speak.

“Who knows? Never been invited to a raid before.”

Burton must have heard us because he strode over to our table, and draped an arm over my chair. “Evening, ma’am. What’s a classy dish like you doing in this crummy gin mill?”

How dare he! “Get your hands off me!” I shrugged off his arm, shoulders stiff. He backed away, surprised. Up close, I noticed how young he was, late twenties, face smooth and tanned.

Nathan stood up, a full head shorter than Burton. “Back off, buster. Leave my date alone.” Obviously Burton’s gun and badge failed to impress Nathan. What he lacked in stature, he made up for with attitude.

“Your date?” Agent Burton smiled. “Lucky guy.” He took a sip from my cup, then spit it out.

“If you’d asked nicely, I could’ve told you it was Coca-Cola.” Watch it, Jazz. In school, I’d often gotten in trouble for talking back to my teachers, but they hadn’t carried a badge or a loaded gun.

“Excuse my manners, miss. I can’t resist a pretty face and a smart mouth.”

And now for a bit about this very talented author: 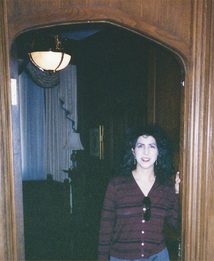 Ellen Mansoor Collier is a Houston-based freelance writer/editor whose articles, essays and short stories have been published in several national magazines.She graduated from the University of Texas at Austin with a degree in Magazine Journalism, and was active in Women in Communications (W.I.C.I.), serving as president her senior year. FLAPPERS is her debut novel, and she’s currently working on the sequel, BATHING BEAUTIES, BOOZE AND BULLETS, due out this Spring.


Thanks for stopping in and thanks for being my guest today, Ellen!!
XO AJ XO

Thanks for featuring FLAPPERS today, A.J.! Hope all is well with you and your novels!
Best, Ellen

Hi Ellen! Sorry I missed you yesterday! Crazy day and we were traveling over the weekend, so I wasn't online much! Hope your sales are skyrocketing, hon! XOXO

AJ, the pleasure was all mine!
Your blog is a class act!
Glad you're enjoying FLAPPERS--sales are good, but no sky rockets. LOL
I'll e you when BATHING BEAUTIES comes out if you want a copy, soon I hope.
Thanks again & best wishes, Ellen