Murder, jewel thieves and terrorists intrude on an American woman's
Roman holiday; can she trust the sexy,
mysterious Italian man who comes to her aid?
Lexie Cortese is in Rome to forget. The last thing she expects is to meet a sexy Interpol agent who suspects her of being part of a terrorist plot involving a stolen diamond. Suddenly thrust into a world of murders, muggings, and kidnappings, Lexie doesn't know what to think--or who to believe.

Dominic Brioni's assignment is simple. Befriend the American and bring her to justice. Only Lexie seems the most unlikely terrorist Dominic has ever met. Sweet, determined, and direct, she faces life with courage and fire, a fire that sparks his protective instincts and a longing for something more--something he allowed himself to hope for only.
Excerpt: 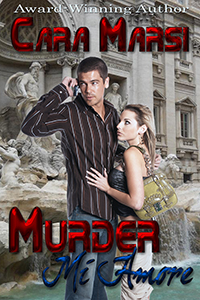 Lexie had started to run to him when someone grabbed her arm, pulling her around. A man, his face hidden by a ski mask, held tightly to her. Her shock ratcheted to fear. “Let go,” she yelled, trying to jerk her arm away from him, but his grip tightened. The dim light from the balcony above illuminated his flat black eyes. She had seen those eyes before. Holy shit. She was in trouble. The masked man grabbed for her purse. She screamed, and with strength she didn’t know she possessed, whammed him on the head with her purse. He staggered back, swearing, and slipped and fell. Lights and freedom beckoned from the nearby Via Corsi, but all Lexie could think about was Dominic. Turning on her heels, she ran to him, slipping on the ancient stones herself as Dominic struggled to stand. But before she could reach him, the mugger caught up with her and grabbed her shoulder, twisting her around. Dominic sprang up and flew at the mugger, knocking him to the ground. The two men grappled, rolling together on the cobbled street. Lexie, her heart thumping wildly, looked for an opening to bean the mugger again, to give Dominic a better chance at overcoming him.

“Stop it! Stop it! Leave him alone!” The mugger ended up on top, and she whaled away with her bag, getting in any shot she could.

Shouts and the slap of running feet vibrated through the alley. The mugger swore, jumped up, and raced away, a few men giving chase. Several others helped Dominic to stand, yelling in excited voices, and gesturing toward where their attacker had disappeared.

Dominic winced in pain. Lexie looked down at his ripped, blood-soaked pant leg. “Dominic, you’ve got to get to the hospital. You’re bleeding.”

“I’m okay,” he said. “It is nothing.” Brushing dirt off his jacket, he turned to the men and said something in rapid Italian. With nods, they strode away.

Breathing heavily, Lexie disagreed. “You’re not okay. We’ll get a cab and take you to the hospital.”

He cupped her shoulders. “I’ve been through worse. I’m fine. Are you okay? Did he hurt you?”

“No. I’m…” The full impact of what had happened hit her. The adrenaline that had given her strength suddenly dissipated and she began to tremble. “I’m not okay.”

“Lexie.” Dominic moved forward to take her into his arms. She held on for dear life, needing his strength. He rubbed his hand along her back. “It’s okay, Lexie. We’re both okay. You’re safe with me.”

She clung to him. It wasn’t her imagination. Strange things were happening. She had nothing anyone could want. She didn’t know who to trust. Dominic said she was safe with him. But was she really? 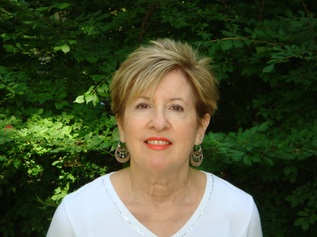 Award-winning author Cara Marsi is a former corporate drone and cubicle dweller with a romantic soul. She craves books with happy endings and loves to write about strong heroes and the independent women they love. She also loves to put her characters in dangerous situations and situations that are merely dangerous to their hearts and watch them fight for the happy endings they deserve.

She credits her love of romance to the old Thirties and Forties romantic comedies she watched on late night TV growing up. She's published in contemporary romance, romantic suspense, paranormal romance, and has also published numerous short romance stories in national magazines. She and her husband enjoy traveling and she loves to write about the places they've visited. They share their house with a fat black diva of a cat named Killer.

Thanks for featuring my book, AJ. And thank you, Patsy, for commenting.