I'm thrilled to welcome Andrew P. Weston to Tattered Pages during his Bookmark Blitz Tour and join in introducing Blood-Moon!

Special Forces v Nightmares Come To Life...
Once every few hundred years a Blood-Moon rises on an unsuspecting world, and when it does, the very stuff of myth and legend comes to life.

Discover the terrifying reality for yourself in…Blood-Moon. 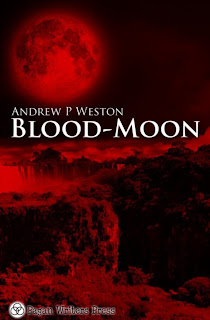 I saw Paxton fall, one cat having its jaws firmly clamped around his neck, the other, working with it, holding onto his ankle. He didn’t go down without a fight and managed to drill the one on his foot through the skull, before his neck snapped. I was just about to empty my magazine into the remaining jaguars, when I saw the one Paxton had shot through the head twitch and start to rise off the ground. What the fuck!

The other two cats were almost upon me, so I reacted instinctively. Using my momentum, I bunched my muscles and launched myself out from the rocks, knowing full well the areas closer to the ravine wall would be the most dangerous.

I fell for what seemed an eternity, only to have the wind knocked out of me as I hit the water hard. Coughing and spluttering, I broke the surface and looked back up toward the ridge. A blood-moon was beginning to rise, and by its light I saw five silhouettes peering over the top of the ledge, growling to each other as if they were having a conversation. I couldn’t make out their eyes, but I knew each one of them was looking directly at me–even the one that had been shot in the head!

For some reason, that sent a shiver all the way down my spine and into my boots. Striking out for the opposite shore, I decided to put as much distance between the jaguars and myself as possible. I’d lost my machine gun in the pool, but the pistol was still thankfully secure in my shoulder holster. Patting my hip, I also confirmed my ka-bar was still there. With one last look at the eerie crazy-gang, I ran in the opposite direction, determined to put as much distance as possible between them and me. Needless to say, I quickly lost my sense of direction. I can honestly say I didn’t give a shit! 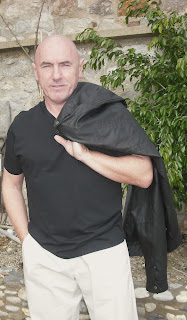 Andrew P Weston was born in the city of Birmingham, in the UK and grew up in the towns of Bearwood and Edgbaston. He eventually attended Holly Lodge Grammar School for Boy’s where he was School Captain and Head Boy. He was an active sportsperson for the school, college and a variety of rugby, martial art, swimming and athletics teams throughout the city. On graduation in 1977 he joined the Royal Marines fulfilling a number of specialist roles both in the UK and abroad. In 1985 he became a police officer with the Devon & Cornwall Constabulary, and served in a variety of uniformed and plain clothed departments until his retirement in 2008. Over those years, he wrote and illustrated a selection of private books for his children regarding the life of a tiny kitten, called, “The Adventures of Willy Whiskers”, gained further qualifications in Law and Religious Studies, was an active member of Mensa and continued to be an active sportsperson, providing lessons free of charge to local communities. An unfortunate accident received on duty meant Andrew had to retire early from the police force, but after moving to the sunny Greek island of Kos to speed up his recuperation, he was at last able to devote time to the “Guardian Concept” he had developed over his years in the military and police. When not writing, Andrew enjoys Greek dancing and language lessons, being told what to do by his wife, Annette, and hunting shadows in the dark. He also has a magnificent mustache collection. Andrew is now contracted to Pagan Writers Press for three books. “Fairy Tail”, is a short, but dark and gritty erotic paranormal/thriller with a twist. The second book, “Guardian Angels” is the introductory book to the “Guardian Series”, a sci-fi action/adventure epic set in the near future. The latest short story, “Blood Moon”, is a paranormal action/thriller set in the jungles of South America. Further work on the Guardian Series and a new paranormal series, The Cambion Journals, has been completed and will hopefully be published during 2013.

BlueHost is one of the best hosting provider with plans for all of your hosting needs.