A Visit to Michelle's Happy Place! 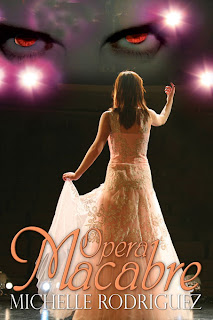 Count Aiden de Lazarus has grown apathetic to the world around him and the monotony of immortal life. Determined to regain his zest for vampiric pursuits, he chooses a mortal girl and bites her with the intent to drain her. Instead, her intoxicating taste and enchanting beauty stirs feelings he has long buried. Scared by such mortal feelings, he gives her to another vampire as payment for a debt.
After eight long years, Bianca is still living a cursed life—singing on stage in Alexi's profitable opera and enduring the bites of the undead as part of his undercover auction when the stage lights dim. Doomed to become Alexi’s vampire bride, her future is bleak.
Aiden is horrified to find Bianca still alive and Alexi’s prized possession. Her image has continued to haunt him. Now he must find a way to free her from the life he unwittingly condemned her to and prove that he, unlike the vampires she has known, can be a man worth loving.
Excerpt:
“Bianca,” he whispered provocatively near her ear, and felt her entire frame quiver in his grasp. With a wolf-like grin curling his lips, he bent nearer to that tempting pulse of her throat, but instead of biting her as he so ached to do, he grazed his lips against it, a feather light kiss, eliciting a soft, strangled gasp from her. Unable to help himself, he grew bolder in his endeavors and let the very tip of his tongue trail the same path.
Unwelcome and yet uncontrollable heat filtered through her body as it arched against him, desperate to get closer to that devil’s mouth. The voice in her head that should have been screaming at her to stop was only muttering fragments of musings, lost as well to the sensation, as she found herself unable to do anything but surrender.
Aiden burrowed his mouth against her throat, covering the sensitive flesh with seductive kisses. His tongue darted between his lips, teasing, tasting as she writhed fervently against him.
“Bianca,” he breathed again between kisses, “what is it that you want?”
“You!” she heard herself gasp out as though someone else had spoken.
“Oh? And what do you want me to do to you?” He gently nipped at her pulse, hinting at his desire, his hunger tearing at him to be satiated.
“Bite me… Oh, please devour me, Aiden!”
Here's where you can find Michelle on the web:
Website:  http://www.michellegliottonirodriguez.webs.com/
Facebook:  http://www.facebook.com/pages/Michelle-Gliottoni-Rodriguez/313983835292688
Thanks for joining me today, Michelle!
It's been a treat hosting you at Tattered Pages!!
Posted by AJ Nuest at 5:30 AM

Love the title! And the excerpt is a real teaser. Also, enjoyed the blog.

I really enjoyed the excerpt. Definitely adding this to my wishlist. That thing just keeps growing. :-) So many great authors Congrats on the new release.

My kind of story!

I love your escapism, Michelle. I do the same sometimes. If I'm very upset or angry I just can't write. I discovered that long ago. But I write to get away from it all when I can. Your insomnia turned into a blessing for us!

BlueHost is one of the best web-hosting company with plans for any hosting needs.