Thank you so much for joining us today, Doris! To start us off, tell us about your writing routine.
I have a day job and an empty nest so I write in the evening (on the couch or on the lanai) and on weekends.
Sounds familiar! :-) Give us a taste of your favorite authors, those that inspire you to write.
I was of course hooked on romance by Gone With the Wind.  But since then, Kathleen Woodiwis, Maeve Binchey, and Jude Deveraux.
Which is your favorite romance subgenre to read?
Any American historical romance.
We all know the world of publishing is fraught with highs and lows. How do you deal with criticisms or rejections?
With four books written and two published, I'm used to rejection.  I simply look at the criticism if I'm lucky enough to have it, correct or dismiss as I feel necessary and move on to the next.  I've dedicated one book to the principle of persistence and truly believe that if you don't quit, you will succeed--eventually.
What do you expect from the author editor relationship?
I expect them to treat me as a colleague, but also to challenge "red herrings" that I may have missed and give me expert advice on how to strengthen my work.
Okay, now on to the good stuff. Tell us a little about your latest release.
Passion's Spirit was a long-time coming. Years of stops and starts.  But this story of forbidden love and racial tensions during a pivotal time in America's social and cultural development was a story that wouldn't go away.  Sean, as the manor-born, privileged southern gentleman and Elena the mixed-race Spanish/Apache orphan determined to avenge the murders of her adopted white parents, are the perfect mix for a clash of cultures, races, and social status.  So, as Sean and Elena pursue their often opposing agendas, they must learn to trust as well as love each other if they expect to survive an enemy who has waited a generation for his "pot of gold". Elena's mix of missionary Christianity and Apache spirituality, Sean's struggle to reconcile his responsibility to his family's ancestral plantation and his yearning to explore the West, and their life and death race with an enemy who's waited for, make for an exciting tale.
This sounds completely AWESOME! Care to share a short blurb or excert?
When Sean pulled away, Elena looked into his eyes wondering, is this what love feels like, or is it only lust? She decided that nothing as beautiful as the moment they’d just shared could be evil. But it could never be love, either. She had felt his passion press against her and ached for him to fill her. Now she was grateful he hadn’t.
They were from different worlds still at war with each other. He could never survive in her world and she refused to live in his.
As if he read her thoughts, he leaned into her, whispering so close to her ear that it could have been a kiss, “Why can’t you be Mary Louise? And I the Apache brave who will eventually claim you?” Then he turned to stare at the stream patiently following the course nature had carved out for it.
The question echoed in Elena’s mind. For a moment, his heart had beat to the rhythm of hers. The curves of her body had melted into the angles of his as they breathed the same breath and tasted each other’s souls. For a moment, they had truly been one body and one soul.
Now separated, the chilly breeze that stirred the pine needles at their feet told her that when she was with him, even angry, she was whole. And though he changed his moods faster than the mountain gods and was promised to marry a weak and silly white woman, part of her would always belong to this loco Gringo.
She also turned her gaze toward the river. “We can only be who we are.”

Holy cow, Doris, I LOVE that excerpt. Of the characters in the story, which is your favorite?
Elena is my my favorite.  Orphaned, raised in a Santa Fe mission school and sent into the land of her enemies with a secret message that turns her life around, she remains true to both her Apache blood and her Christian upbringing.  Her courage to both sacrifice and fight for love make her a true heroine.
Doris, this story sounds right up my alley. So, what are your working on now?
I have just finished a prequel to Passion's Spirit titled Passion's Secret, which brings the secrets, strengths, weaknesses and passions of the Langesford/O'Grady family to light.  These books are part of a four-book series called Passion's Legacy and follows the lives, loves, and amazing legacy of this complicated and courageous family from one century into another.  Passion's Secret will be released by The Wild Rose Press on April 20, 2012.
Uhhh…wow? Holy cow, that alone shows off that persistence pays off. So give aspiring novelists your biggest piece of advice.
Never stop learning, writing---and never give up on the dream. Nothing you write is ever wasted, so save it.
Here's a peek at the beautiful cover and blurb: 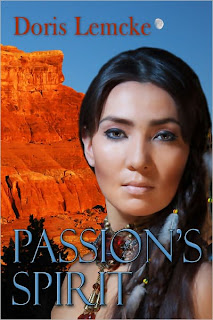 Passion’s Spirit is available in print and ebook on October 19, 2011 from The Wild Rose Press as a Cactus Rose Romance.  Passion’s Spirit is the debut novel in the four-book, PASSION’S LEGACY series.  Passions Secret will follow with a 2012 release date.
Untamed Hearts, Worlds Apart – Santa Fe, New Mexico 1892
Raised by Santa Fe missionaries, half-Apache orphan Elena Santiago has vowed to avenge her white, guardians’ murders the Apache way. But first, she must masquerade as a white woman to deliver a dangerous message across the country into the land of her enemies. And after one look at the untamed spirit behind Sean O’Grady’s smoky grey eyes, she realizes that her heart’s response to his body, more like and Apache warrior than a soft, white “gentleman,” is far more dangerous than the warning she carries.”
Sean O’Grady has always dreamed of exploring the Wild West, but at 25 years old, he’s put aside those dreams to wed his neighbor and run their two Georgia plantations. When Elena arrives looking and speaking more like a Spanish lady than an Indian mission girl, he wonders if she's really who she says she is. Is she a virgin or a vixen? The question taunts him as he struggles with feelings he’s never felt before. Feelings that could get them both killed.
You can find Doris on the web here:  www.dorislemckeauthor.com and I am on Facebook and Linkedin.
Posted by AJ Nuest at 5:30 AM

Wow, Doris! This book sounds amazing! And the woman on the cover is so beautiful. Best of luck with the series! Adding Passion's Spirit to my growing TWRP TBR list! :)

Hi there, ladies. Your story sounds very enticing, Doris. Best wishes for its future and to you too!

Great post ladies! Doris, the book sounds awesome. Much luck and many sales!

Love that cover, Doris, and Elena sounds like she understands the concept of persistence. TBR for sure.

Great interview and love the excerpt, Doris. Thanks for bringing her to us, AJ! Oh, and yes, that cover is beautiful! I think I've already mentioned several times that I want to read this one.

Thank you so much to everyone for stopping by yesterday! Sorry I didn't the chance to pop on until now. Busy, busy time of year!! Big hugs to you all and I'm sure Doris appreciates your comments....Doris? Doris are you there??

This book sounds tasty!! One to devour!! Thanks for sharing! Can't wait to add it to my TBR list!! Nothing like a read for the holidays!