Thank you so much for being here, Silver. Tell us how your writing career began. 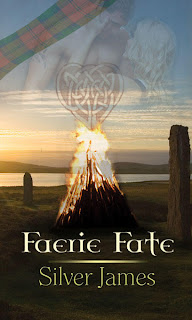 If you could go back, do it over again, would you take a chance to find true love?
What if you had no choice?
On her fiftieth birthday, the faerie catapult Rebecca Miller a thousand years into the past to find her happily ever after with Ciaran MacDermot, Chief of Clann MacDermot, the last Fenian warrior in his line. In the twenty-first century, Becca is old enough to be Ciaran’s mother. In the tenth, she’s young enough to be his bride.
The fae forgot to mention one slight stipulation. The lovers must be bound before the Festival of Light, or Becca will forever disappear into Tir Nan Óg, the faerie Land of the Ever Young.
Will they discover the binding words before time runs out and they’re torn apart forever? Or will their eternal love defeat their Faerie Fate?
Without the words, history is doomed to repeat itself.
EXCERPT:
The little clock she’d received as a present on her twenty-fifth birthday whirred and chimed the time. One small, tinkling chime. Two. Finally, twelve in all. Midnight between March twentieth and March twenty-first. The vernal equinox. The day when light and dark, good and evil, love and hate all balanced on the finely tuned axis of mother earth.
Voices, strange with lilting accents, whispered somewhere in the darkness of her dream.
****
“She sleeps,” said a soft voice, feminine, one Becca didn’t recognize.
“Aye,” said the second voice. This one was deep, male, arrogant.
“Will she remember?”
“Nay, she’ll not.”
“How then will she know what to do?”
“She’ll know.” He sounded confident.
“What of him?”
“Aye, he’ll definitely know now. He should have known the last time, but she was too afraid, and he was too full of himself.”
“What is so different this time?” She was skeptical.
“She was young then, not matched well to him. Now, she’s no young soul. She’s had all those lives without him, the lonely nights, and the ache in her heart for all time. This time, she has courage born in the fires of suffering. She’ll know not to run from him, but to him.”
“You’re sure with the knowing of it this time?”
“Aye.”
“And, if it doesn’t work?”
“Ciaran dies. Again.”
A sharp intake of breath came from the woman. “That cannot happen. Too much went wrong the first time.”
LINKS:
Website: http://www.silverjames.com
Twitter: @SilverJames_
Wild Rose Press Page (buy links): http://www.thewildrosepress.com/index.php?main_page=index&manufacturers_id=674
Amazon Author Page: http://www.amazon.com/Silver-James/e/B003NTF5IW/ref=sr_ntt_srch_lnk_1?qid=1319131880&sr=8-1
Facebook: http://www.facebook.com/pages/Silver-James/122400874477832
Hi, AJ. Thank you so much for inviting me to visit you here at Tattered Pages.
Posted by AJ Nuest at 5:30 AM

Hey Silver! Great to see my fellow Outlaw Okie here. Don't you just love AJ's Tattered Pages? So worn and comfy. I already have Faerie Fate (thank you again) so I'm just stopping in to watch Iffy chase you around the room. :)

Hi, Calisa! Shhhh. Iffy's still asleep so maybe I can get some work done today. ;)

Very cool excerpt, and such a wonderful cover! Great post.

I'm so glad you're here today, Silver! And I'm cracking up about "Iffy". You're too funny!

Hi, S.G. I've been very lucky in my covers! The fabulous Rae Monet has done both of my Faerie covers and I'm crossing my fingers that she'll do the third one. Thanks for stopping by today!

Don't encourage her, AJ. Iffy is a real pain in the tush. And dangerous. Very, very dangerous. *looks shifty eyed* I've got her distracted with brownies and ice cream at the moment.

Great interview, Silver. Congratulations on the book. Can't wait to read it. I read the first one and it was wonderful. Best of luck...

Hello AJ...just getting ready to start on Jezebel's Wish...looking forward to it!

Well don't enter me in the contest. What would I want your book for? Oh, nevermind, already have one. snerk....

Iffy seems to be infecting others today.

Great interview, Silver (and AJ). Of course I knew most of this already (no, I'm not a stalker, but pretty close ;) with the exception of the eighth grade writing (will make a note in my Stalker, er, Facts about Silver book :)

Don't worry about the draw - I already have my own copy of Faerie Fate.

What a wonderful interview! I was expecting a set list of questions that every author answers and this was so personalized I was sucked in. Great job! Thanks!

I'm so glad I can make you laugh, AJ! Nope. I don't really write comedy. Most days, my life is a sitcom so I get all serious and stuff in my books. No. Really. Sh'up, Iffy. I hear you snickering over there!

Hi, Alicia. Thanks for dropping by! I'm so glad you enjoyed FAERIE FATE. The 2nd book, FAERIE FIRE, stepped away from these characters, but for Abhean and Manannan mac Lir. It's fun to revisit Ciaran and Becca and especially Rory.

Ev, you win stuff all the time. Of course, I wouldn't enter you! So there. *pbhthhh* But thanks for dropping by anyway. I'm tellin' ya, Iffy is a major pain today. Can I send her over to spend the night?

Ahhhh, Janet. My favorite stalk...er...fan. Glad to see you peeking your head out. Iffy keeps threatening to find that book and make me update it as YA. Nope. Not gonna. Uh huh. She can't make me!

Hi, Luna. AJ is a marvelous interviewer! I had so much fun answering her questions and it's been a blast visiting with folks here at Tattered Pages. Thanks so much for dropping by!

Ok Wait a minute... this is a drawing for book number TWO? I want back in then! I only have book one! I NEED BOOK TWO! Put my name back in the hat, please!