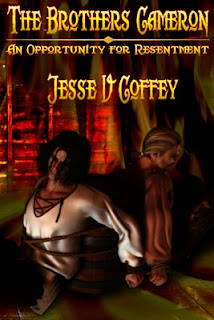 Stephan Cameron is impetuous and lusty; William Cameron is measured and romantic. Only one thing can divide the brothers--an attraction to the Lady Jessica Chynoweth, a flirty redhead who seems to have eyes for both--and Baron Joseph Turnbull besides. Only one thing can bring them together again--bringing the murderer of their father to justice. If it doesn't kill them first, they will!
First, I'd like to thank AJ for hosting me today. My name is Jesse V. Coffey and I'm here to promote my latest release, The Brothers Cameron: An Opportunity for Resentment—officially out for the public as of September 15th by Edin Road Press. It's available through my publisher, as well as Amazon's Kindle bookstore and iTunes/iBookstore. It will be available through Barnes & Noble's Nook bookstore, Sony's bookstore, and others at the end of the month.
I've been writing pretty much most of my life—since grade school, actually. I was born with a vivid imagination, which has been both blessing and curse. I would tell myself stories at night, to put myself to sleep. They were long involved fantasies that usually (and typically) cast myself as the heroine who saved those in trouble, was rescued by Prince Charming (usually whatever actor or musician I had a severe crush on at the moment), and lived a fabulous life. Many times, I would relive those fantasies over the course of many nights, altering tiny details as I did. The story played out, I would fall asleep, happy and content.
Two things finally dawned on me as I got older. The first was that life was never going to be like my fantasies. Prince Charming didn't exist, no one ever broke out into song or felt the same sense of romanticism that I did, and the foibles of human nature meant that no one was ever going to mistake me for a heroine in any reality.
The second thing was that if I couldn't make the real world like my dream world, then I'd create my dream world as I wanted it. And rather than fantasize about it in my head, I'd write it down. Fortunately, by that time, I'd met my friend Ann. I had a partner—she introduced me to rock and roll, gorgeous rockers with amazing talents that we could both drool over. And I introduced her to writing them down. We entertained each other for more years than I care to count, writing those fantasies for each other.
And thus began my "love affair" with the romance novel.
I have to admit, though, that reading romances of the time period really put me off the genre. They were formulaic, clichéd, and built around the premise of "boy meets girl, both hate each other on sight, boy forces sex on girl who then falls deeply in love with said sexual assailant, misfortune draws them together, they fall in love forever." I won't even go into the obvious problem with that, but suffice it to say, all you had to do was change the names, move the setting, and it was the same story, book after book after book. But I still loved a really good romantic story.
It wasn't until about six years ago, when I was introduced to Diana Gabaldon's Outlander series and then Karen Marie Moning's Highlander series that I realized that modern day romance novels went far and beyond the clichéd gothic and bodice ripping stories of old. My heart rejoiced to find stories that had substance, that weren't put out with a cookie cutter script. There were real men who had faults and problems but still remained heroic and honest. Women who didn't have heaving bosoms or were waiting for Prince Charming to sweep in and save the day. Why, these women actually did some saving on their own.
Sex was real; no more euphemistic names for body parts or acts of passion. A cock was called a cock! A vagina was a vagina or a pussy. And honey, how they loved and had sex. No more teasing, but real and honest emotions and it felt so good.
And my favorite part was no more hiding in the closet, either. I could come right out and admit that I loved these stories and I wasn't alone. That's the part I really love. That all of these books and stories were being snapped up by men and women, and these authors were loud and proud. That did it for me.
The Brothers Cameron: An Opportunity for Resentment was, quite literally, the second book I'd ever written. But it was certainly written from those stories of my youth, those fantasies in my bed at night before I fell asleep. Those divine brothers, Stephan and William, and the adventure. Those two handsome and sexy men and their loves. I practically purred as I wrote it. I'm purring now, actually; because I'm finishing up the outlines for the second and third books in the trilogy. So many adventures to have. So much angst. So much love and love making.
Interested yet? I hope you'll read it. I hope you enjoy it. And I hope it helps you find those fantasies in your head.

Jesse V Coffey, who also writes as J. W. Coffey and Meggie Chase, is the author of short story collection Illusions & Reality (J. W. Coffey) and new release The Brothers Cameron: An Opportunity for Resentment. She write a literary column and a writing column for the Lexington KY affiliate of Examiner.com, as well as a National Indie Romance Novel column. She also is the on air hostess of Edin Road Radio, an internet radio show that introduces new authors reading excerpts from their work. She is a member of ASCAP and the Erotic Authors Association.
Here's where you can reach Jesse!
http://www.authorjwcoffey.com
http://www.edinroad.com/radio
http://www.edinroad.com/press
http://www.facebook.com/jessevcoffey
http://twitter.com/#!/JesseVCoffey
http://about.me/jessevcoffey
Posted by AJ Nuest at 9:42 AM

First off- It's great to 'meet' you Jesse and congrats on the release! Wow are you a busy, busy woman. Your books sound awesome though I don't know where you find the time to write! Brothers Cameron sounds intriguing. I may just have to grab it up soon. I think it's great you do a radio show to help promote authors, too. Keep up the good work!

Nice to meet you, Jesse! Love that you decided if you couldn't make the real world like your dream world, you'd create your dream world the way you wanted it! I know that. I 'get' that! And like you, it's a large part of why I began writing. I'll be checking out The Brothers Cameron - it sounds like a wonderful read!

Yay to your book being released Jesse! What a great opportunity to find out a bit more about you. You're so busy promoting other authors, it must be a strange thing to be the interviewee : )

Wow, your journey to writing sounds a lot like mine, and I too love those authors you mentioned, especially Diana Gabaldon. I love how honest and real her books are. There is no shying away from anything uncomfortable or disturbing. I'm putting your book on my large TBR pile, and how exciting it is one in a series! I love my series : )

Thanks, everyone. I loved writing this book because I had an "audience" at the time. As soon as I start writing the next book, if you're interested--and you've read the first--I'll let you know. I usually put it up on WeBooks for a closed group to read along. You're welcome to be part of it.

BlueHost is definitely one of the best hosting company with plans for any hosting requirements.