This week I have the talented Lisa Sanchez at Tattered Pages, sharing excerpts from her latest release OBSESSED! Thanks for being here Lisa!

First of all, I want to thank AJ for having me on her blog today. I’m so excited to be a part of the Scorcher Blog tour, and have had a blast the past few weeks.
Since I lit a flame in my previous post talking about the shmexiness of tattoos, I thought I would tempt you a bit more with a small snippet from Obsessed. This teaser showcases the tension between Nick and Halley when she first lays eyes on his tattoo in all its yummy glory. Enjoy!
Breathless and barely able to speak, she trailed her hands up onto his shoulders and then down the front of his tight-fitting black T-shirt. Her fingers danced across the edge of the cotton, and she could have sworn she felt him tremble when a finger accidentally made contact with the hard, sinewy muscle beneath. “Your tattoo. It’s so beautiful. Can I… Can I see the rest of it?”
She tore her gaze from his large, impressive frame and looked up.
Nick stared down at her with dark, hunger-filled eyes, and gave a single nod.
He lifted his hands over his head as Halley latched on to the thin cotton, pulling it up and over the wide expanse of his chest.
There were no words. It was rude, and she knew it, but Halley couldn’t help but stare at the magnificent creature before her. Every last inch of him was covered in raw, well-defined muscle. He wasn’t bodybuilder huge but had the build of someone who worked hard and worked out even harder. Smooth skin covered a broad chest and—oh yeah, baby—a set of washboard abs.
The tribal markings covering his right arm traveled up over his shoulder and down the entire right side of his torso, and—holy Lord—his nipples were pierced.
Her skin blazed, and she reached forward with a shaky hand, certain the only way to gain relief from the erotic pull he had on her was to give in to the call of his body to hers. The sense of safety and comfort she felt whenever she was around him roared right along with her desire for him, and she knew somehow, deep in her gut, this man was essential for her survival.
What about you? Do you find tattoos sexy? If not, what’s the first thing you notice when you meet a hot new guy? What draws you in?
Leave a comment on this blog, as well as the other five blogs on the Scorcher Tour to be entered to win a free PDF copy of my erotic suspense, Obsessed. The winner’s name will then be forwarded into a final drawing at the end of the tour for a chance to win a $30 Amazon gift certificate. 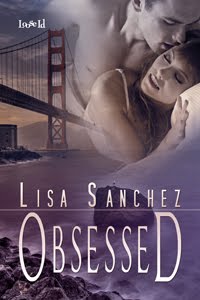 The victim of both a brutal attempted rape and now a serial stalking, Halley Davis is broken, and desperate to glue the shattered pieces of her life back together. Tormented by a psychopath and battling a heavy dose of anxiety, sex and dating are the last things on Halley’s anxiety-ridden mind. That is, until she meets the man who rescued her from the hands of a would-be rapist. With a body made for sin, a wicked, sexy tattoo and an aura that screams “badass,” her rescuer not only calms the storm of terror raging inside her mind, he ignites a passion within her she’s never known before.
Tired of using meaningless sex to drown out the horrors of his past, Nick Ackart has sworn off women. In fact, if women were classified as meat, his ass is Vegan. Despite his determination to remain unattached, Nick is unable to stay away from the emerald-eyed beauty he rescued from a sadistic pervert. Immersed in a tangled web of sexual desire and deep emotion he was certain was long dead, he vows to protect Halley from the monster hounding her, even though he stands to lose his heart in the process.
Loose Id- http://www.loose-id.com/Obsessed.aspx
Amazon- http://www.amazon.com/Obsessed-ebook/dp/B0053IK8JM/ref=sr_1_1?ie=UTF8&qid=1312759046&sr=8-1
Lisa Sanchez Blog- http://www.lisasanchezromanceauthor.com
To continue to the 3rd stop, click the link to be taken to Darlene Fredette’s blog: http://findingthewritewords.blogspot.com
Posted by AJ Nuest at 8:34 AM

I have never actually liked tattoos much, but I don't mind them as long as they're not all over...on some men, with the right muscles, it can look great-otherwise, not so much. edysicecreamlover18ATgmailDOTcom

Krystal- I'm not a fan of tattoos covering most of the body either. I agree with you, though. Tatts on a muscled physique are YUM!

I am a fan of tats, but not on a big flabby guy...they have to be built for it.

I always check out eyes and butt!

Eyes and butt are a good combo! Thanks for stopping by Maria!

I'm actually happier about the piercings than the tat *swoon*

I love a few tats and piercings on a built guy...YUMMY! Eyes are usually the first thing I notice, unless I see his back first, then it is the butt!
manning_j2004 at yahoo dot com

June- Nothing wrong with backs and butts!! Woohoo!

He sounds so delicious! I generally dont like how guys look with nipple piercings, but Nick sounds hot enough to pull it off!
MJB
msmjb65 AT gmail DOT com