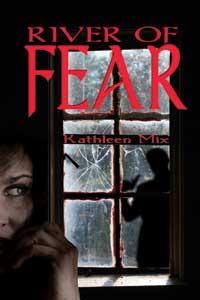 Luke sat at the table clad only in pajama bottoms. His muscular chest rose and fell. His tanned fingers brushed over the lip of a candleholder, and she thought about how his hands were always moving, caressing, exploring. She imagined his long fingers and strong hands moving over her back as she pressed against that solid chest.

She felt her cheeks warm and turned away. “Coffee?”
“Sure.”
Busying herself at the counter with her back to him, she started a pot perking.
“You should have a smoke alarm upstairs,” he said.
“I do. On the wall next to the top of the stairs.”
“Why didn’t it go off?”
“I wondered about that myself. In the morning, I’ll check the battery.”
His eyes undressed her as she walked to the table and sat down across from him. “That robe and nightshirt should be green silk to match your eyes.”
Annie snapped her head up. “Excuse me?”
“You don’t have to wear sexy lingerie though. Everything you put on, I dream of taking off.”
Her heart started thumping double-time, and her mouth went suddenly dry. She’d secretly wanted him to notice her and approve, but knowing he actually had stretched her nerves taut. “And as a houseguest and virtual stranger you’re telling me this because …?”
“We’re going to make love one of these days.”
She drew in a deep breath and licked her lips. An hour ago, toweling him dry then feeling the caress of his eyes when he turned around, she’d had the same thought. But he was a drifter. He’d be gone in a couple weeks. She sifted through her brain for an appropriate response. Found none. “Don’t I have any say in this?”
He eyes locked with hers. His lips curved into a sexy smile. “You know I’m right.”
She did. And her pulse raced as her mind’s eye supplied arousing images of them together.
But she wasn’t going to admit anything to him, especially now when he had that smug look plastered on his face. “For your information, I’m not that easy.”
“Easy has nothing to do with it. I can see it in your eyes. I can feel the sparks in the air. You’re burning inside, just like I am. Before long, everything is going to erupt. It’ll happen.”
Desire flickered in her middle. She shifted in her seat.
He reached out and took her hand. “Seeing you in your room tonight almost drove me crazy.”
Annie pulled her hand back and hid it in her lap.
“I’ve been trying to resist you,” he went on. “But every man has a limit to his restraint. And this near miss with the fire tonight reminded me that the time any two people have together can be cut short at any minute.”
She swallowed. Although the coffee had stopped perking, she was glued to her chair.
He leaned toward her, ran his fingers up her arm, softly traced the line of her jaw.
Her palms were moist, and her pulse was in overdrive.
He shifted closer to kiss her and she met his warm lips half way.
His fingers explored the sensitive skin near her ear. A hot surge of need blazed along her spine. He drew her closer, inch by inch. His hand slid down her throat. Lower. He gently cupped one breast. Even through two layers of clothing, his slow caress seared her skin.
A sentry inside her head shouted a red alert. She’d only known him a few days and things were moving too fast.
She clutched the edge of the table before a haze of desire could blanket her brain. Trembling with the effort, she summoned up the strength to draw away.
His hand left her breast and he captured her eyes.
She jerked her gaze away from his, frantic to escape before she did something she might regret. “Ah…the coffee has stopped dripping.”
He looked half sad, half amused. “Does that mean you’re not ready to light another fire?”
Kathleen Mix is the author of five novels. Her latest romantic suspense, River of Fear, is available from The Wild Rose Press. (http://www.thewildrosepress.com/kathleen-mix-m-221.html) She is an avid sailor and spends summer weekends skimming over Chesapeake Bay.  Visit her website at http://www.kathleenmix.com for excerpts from all her novels, sailing articles, and pictures of her boat.
Remember if you eave a comment, you will automatically be entered into Kathleen's drawing to receive a FREE copy of Secret Stranger.
Posted by AJ Nuest at 7:59 PM

This post is a fount of useful advice, and boy howdy, that excerpt...I'm panting for more.

I love the fact that writers can give everyday people happily-ever-afters they might not otherwise experience.

Hi Aj. Hi Kathleen! Congrats on the book. I simply love the cover. The advice you've given is priceless. And the excerpt...good thing I'm sitting under a fan.

LOL! Emma and Telly, you ladies crack me up! See? I TOLD you it was steamy. Yowza! Thank goodness its no longer over 90 here. I might've self-combusted! Kathleen, thank you so much for being with me today! Glad to have you at Tattered Pages!

OMG! The sexual tension of that excerpt is just...Wow! Loved the interview, ladies. Wishing you much continued success, Kathleen:)

Great interview and that excerpt sure was hot :-) Will have to put this on my TBR pile!

Thanks for the comments, ladies. I never thought I wrote hot until a friend who writes erotica read some of my stuff and said OMG. I actually tone it down once in a while. The original version of many scenes are hidden on my computer because my mother reads my stuff and I was embarrassed to have them printed.;-)

You crack me up, Kathleen! I can't tell you the times I've asked my mother..."So, does it embarrass the heck out of you that I write steamy romance novels?" Her standard response is, "I read Lady Chatterly's Lover at sixteen. I'm proud of you." ;-)

OOh, Kathleen, I love that excerpt! You need to dig out those original scenes lady, I LOVE hot!

Have to pull out a fan after that scene, Kathy! Very nice. :) - Sofie

What a great premise, Kathy! (After reading the other comments about the excerpt, I decided to wait until I'm home -- and not at my desk at work -- to read it!) :-) Wishing you much success with the book!
Leah