Embrace the Darkness with Lilly Gayle!

I'm thrilled to have fellow Rose and the uber-talented Lilly Gayle visiting Tattered Pages today! She's here with a sneak peek inside her latest release, Embrace the Darkness. This one sounds DE-LISH! For all vampire fans out there, be sure to check out Lilly's blurb and excerpt after the interview!

Hi Lilly! I'm so glad you're here today. To start out our interview, why don't you tell us how your writing career began. 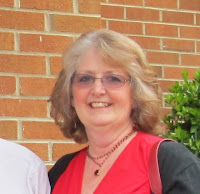 My 8th grade teacher, Miss Patricia Black asked the class to write a story using our spelling words. I filled up a spiral notebook. I wrote all that year and into the summer. Then, I entered high school, and writing stories seemed like a childish pursuit. But during my senior year, I fell in love with reading and writing, thanks to two other special teachers, Mrs. Joy B. Averette and Mrs. Marguerite Stem. I started reading and writing again. I joined the high school literary club. I even entered and won a writing competition on citizenship. But life soon got in the way. College. Marriage. Children. I still dreamed of writing, but it seemed like too much trouble. Then in 1995, my husband bought our first computer and told me to stop dreaming and start writing. We still didn't have internet then, but I started writing stories for my two daughters. It wasn't until 1997 that I decided to write romance. My dedication waxed and waned over the years, but thirteen years later, The Wild Rose Press published my first book, Out of the Darkness. My latest release, Embrace the Darkness is the sequel to OTD and the second book in what I hope will be a four or five book series.

Me too! These stories sound outstanding! So while crafting these most excellent romances of yours, do you stick to one sub-genre or write across lines?

I cross the lines. I write paranormal and historical. My historical books are all set in the Victorian Era, but one is a western, one is set in New York, and one is set in England.

I love, love, love Victorian Era romance! So when a reader cracks the spine on one of your babies, what should they expect for heat level? Do you keep that bedroom door open or closed?

Gotcha! So, talk to me a bit about self-publication. Have you ever considered venturing into this area of publishing?

Oh, how cool. I didn't know that! You've been holding out on me! LOL  I'm gonna go check it out! What about your reading preferences? You mentioned no erotica above. What’s on your nightstand (or downloaded onto your Kindle) right now?

Oh, wow! There are so many great books on my eReader right now. I wish I had more time to read. I just finished a book by Dean Koontz that I downloaded over a year ago. I did get a chance to read a good but extremely short story by Donna Steele in the doctor's office waiting room a few weeks back. Now, I understand why such short stories are so popular. It was a lot better than flipping through a year old magazine while I waited. I'm also currently reading two WIP's by two different critique partners. So, I'm always reading something. I just wish I had time to read more.

I hear you there, sistah! Never enough hours in the day.


And NOW FOR THE MOMENT WE'VE ALL BEEN WAITING FOR!
Here's a peek inside Embrace the Darkness! 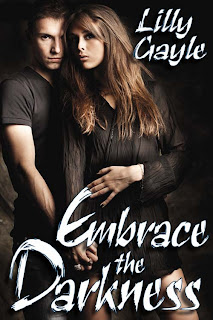 An experimental vaccine gives vampire Gerard Delaroche hope for the first time in two centuries—until two people are brutally murdered, and he suspects a conspiracy between vampires and mortals. To solve the crime, he must put his trust in a beautiful detective. But is former soldier and MP turned detective, Amber Buckley, a threat to his existence? Or the answer to his prayers?

Amber Buckley and her partner are assigned to do follow up interviews in the Lifeblood of America slayings. Amber believes she and Reid are just new eyes on a cold case. That is, until she meets Gerard Delaroche. Something about him teases long-buried memories Amber would rather not chase. However, the two join together, falling into more than resoulationg of a murder case. It seems Amber has come dark secrets of her own.
To find their way into the light, Amber and Gerard must first EMBRACE THE DARKNESS.
~ * ~
He rolled his eyes and huffed. “Stop pretending ignorance. You know what I am.”


“A vampire. Really?” She wanted to scoff, but a chill shivered over her skin. He wasn’t dead. And she’d shot him.


Maybe he was wearing Kevlar. But wouldn’t Kevlar show through that tight-fitting shirt?


Perhaps not. Still, there had to be a logical explanation.


Ignoring the warning bells clanging inside her skull, she shoved the Glock back in its holster and reached for the beer she’d deposited on the counter. She took another long, hard pull on the bottle, hoping to douse irrational thoughts.


Despite renewed fear, she managed to set the bottle back on the counter without dropping it.


“I’d give anything to drink beer again,” he said in a reverent voice.


Amber nearly laughed aloud. Her shoulders sagged. Gerard Delaroche wasn’t a vampire, and he didn’t want to drink her blood. He wanted a beer. Like a normal guy.


Hell, he probably was normal. She was the one off her rocker.


“Want one?” She forced herself to meet his intense stare.


Like that was something a girl could forget. It wasn’t every day a hot guy claimed to be a vampire.


Hell, maybe he was a vampire. The man could stop bullets with his chest.


He took a hesitant step closer. She stiffened and took another cautious swallow of beer. He stopped three feet away. Good. Sexy and crazy was a dangerous combination.
Oooo! This one sounds sooooo good! LOL
Looking to find out more about Lilly and her books? Here's where you can find her on the web (just click the links):
WEBSITE, BLOG, AMAZON, FACEBOOK, TWITTER
Posted by AJ Nuest at 5:30 AM

Great interview, ladies! Lilly I can't wait to read these books and I have both with little to no time to read them yet. :) I love the covers of your books. Your brother does nice work. Congrats and happy sales!

Thanks for having me AJ! As an added bonus, anyone can get a free copy of Embrace the Darkness from Amazon at http://goo.gl/dCcvI :but today is the last day it will be FREE. So, better hurry!

Oh SNAP! Lilly, we gotta spread the word a little more on this! Off to post to the loops!

Lovely interview, Lilly and AJ. I have both of these vampires books on my Kindle and, like you, need a few more reading hours in the day. Wishing you awesome sales!!!

thanks Calisa and Vonnie. If you ever get a chance to read either of them, I hope you enjoy them. I'm so far behind on my reading and writing, it's not even funny. But I am heading to a girl's writer weekend this afternoon and I hope to at least catch up on my writing. I'm taking my e-reader, just in case I want to read too. :-)

Loved the interview, AJ and Lilly. And the excerpt! Best of luck with the release.

I think the idea of writing different genres is a great idea. Enjoyed reading the excerpt and interview. Great

Great excerpt Lilly. It's on the TBR. Good Luck!

Thanks for visiting me on AJ's blog today and for all the lovely comments. I loved writing this story. Hope you'll all visit AJ on my blog: lillygayleromance.blogspot.com