With ALL ACCESS, a contemporary romance series begins
that explores, life, love, and music.
Join the five band members of Chasing Cross
as they find that there's more to life beyond the stage.
As a die-hard groupie, I know I'm ready! Welcome Karolyn James to Tattered Pages as she brings us a peek inside the first in her Brothers of Rock Series, All Access! Whoo Hoo!

I won’t admit my first concert because I don’t want to date myself, but I remember the feeling.  Standing in a crowd.  People cheering.  The lights going off.  And then these five men take the stage.  The lights come on and they’re playing one of my favorite songs.  It wasn’t on the radio… it was LIVE.

Something about concerts just work… the live music… the atmosphere… and yes, the rockstars!  Who doesn’t love a sexy rockstar?
That’s where Brothers of Rock came from.  That question.  On the outside – or on stage – we see rockstars as the amazing creatures of men.  They’re big, powerful, and the command a room of thousands.  Plus, they’re rich and sexy.  I had the idea of a band in my mind for a while.  My travels in and out of the music world let me meet a lot of characters and I knew something had to come of it.  To be honest, when I started writing about a rockstar, it led me to my erotic romance series (Rock Her Curves).  The sexual ooze in the story couldn’t be contained and it couldn’t just be a romance novel.  No way.  That’s when I knew I had to go beyond the stage and the life.  I thought about musicians I knew and still know.  How they function.  And actually, how anyone functions.  All celebrities are people.  Sure, some are wild but some are just people.  That’s where I wanted to tap into it… each band member as a person.  On stage, Chasing Cross is a mega band.  Off stage, they are five people, five men with their own lives.  Their own problems, their own personalities, but yet, they all connect.  They aren’t a band… they’re a group of brothers.  And that’s the fun part of this series.  The band is in the books.  Even though each book follows a band member, the band is present.  With the release of All Access, readers get to meet front man Johnnie.  The second book (due in late April) follows guitarist, Davey.
As of right now, I have five books planned but thanks to the support from readers, sending All Access up the charts on Amazon, I’m actually already coming up with a concept to expand the series more.  I love my readers!
I hope you enjoy Chasing Cross as much as I enjoyed (and still enjoy) creating their stories. 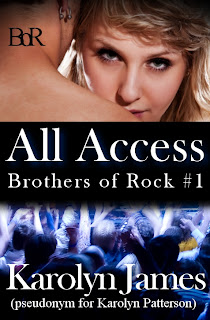 Jess is caught off guard when a sexy stranger buys her a cup of coffee and asks her to sit with him. He's mysterious, nice, and even though he says the right things at the right time, Jess can sense that there's something hidden about him.

As Johnnie sits across from the beautiful woman, he can't believe she doesn't recognize him. Everyone does. It comes with the territory when you're the lead singer of one of the hottest bands in the world, Chasing Cross. With one more show to go before taking a small break in touring, it feels like luck is on Johnnie's side. That is, if he can find a way to tell Jess who he is, without scaring her off.

After her best friend begs her to come to a concert, Jess finds herself standing in the middle of a crowd. The lights are off, music begins, and the crowd erupts in cheers. She doesn't know much about the band, but that's all about to change. When the lights come on, Jess can't believe her eyes. The lead singer of the band is the man from the café.

Plucked from the crowd during the show, Jess makes her way backstage. The encore may have ended on stage, but the real show is just about to begin. Johnnie's passion quickly turns to romance but the more time he and Jess spend together, the more things get complicated. Johnnie has a big decision to make about himself and the band, testing his loyalty and love for the music, and when Jess's dreams start to come true, she starts to realize that true love exists, but it's not always an easy path to take.

You can find All Access and the Brothers of Rock on Amazon and Barnes&Noble. Just click the links!

Thanks for visitng Tattered Pages,
and a special thank you to Karolyn for being my honored guest!
XOAJ XO
Posted by AJ Nuest at 5:30 AM

I love getting to peek into murky worlds I'd be too much of a weenie to enter. TBR!

I LOVE rock stars! Just had to get that out. LOL I'm actually writing a story about a rock star right now. Gotta go with your heart so good luck Karolyn.