Out of the Storm by Kevin Symmons - a Romantic suspense! 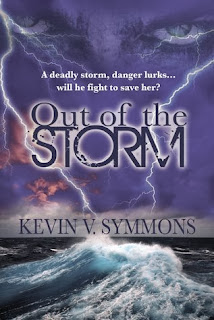 War hero Eric Montgomery returns from Iraq, hoping to revive his family's Cape Cod marina and marry his childhood sweetheart. When his wife and unborn child die in a tragic auto accident Eric's dreams are shattered. He spends long months grieving, losing himself in alcohol, isolation, and anger.

Then Ashley Fitzhugh, a young woman he's met only once, appears on his doorstep one stormy night. Eric is annoyed at first, but soon finds himself caring for his visitor and her young daughter--seeing in them a chance to rebuild the life he lost. When threatening phone calls, mysterious strangers, and covert agents invade their peaceful lives, Eric must decide: Is Ashley the answer to a prayer or part of the nightmare he can never escape?

Find Out of the Storm at Amazon and Goodreads

Kevin Symmons is a successful author, college faculty member, and president of one of the Northeast’s most respected writing organizations. His paranormal novel, Rite of Passage, was a 2013

RomCon Reader’s Crown Award finalist and has been an Amazon Best Seller. His latest release, Out of the Storm, a contemporary romantic thriller set on Cape Cod, is already gathering 5 star reviews and will keep you turning pages late into the night. His novel Solo, a sweeping women’s fiction work that exposes the tragedy of domestic violence in America, will be released from his award-winning publisher, the Wild Rose Press, in 2014. Kevin has collaborated with award-winning Boston screenwriter and playwright Barry Brodsky in adapting one of his story ideas for the screen. He is a sought after public speaker who has appeared across New England. Visit Kevin and like his FB Author Page, @KevinSymmons on Twitter, at Goodreads, Amazon, and at his website, www.ksymmons.com

See the trailer for Out of the Storm HERE!
Posted by AJ Nuest at 12:01 AM