PLEASE WELCOME AUTHOR JUNE STEVENS
TO TATTERED PAGES ON HER
SUMMER MAGIC BLOG TOUR!
Be sure to scroll down to the bottom for the deets
to participate June's fantastic giveaway! 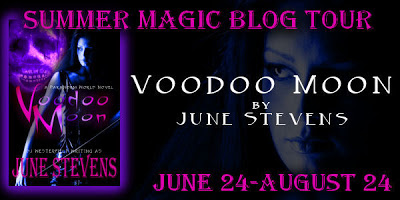 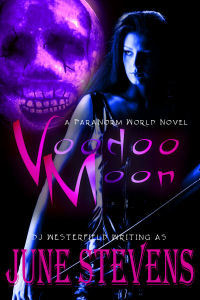 Zombies aren’t supposed to exist, yet they are turning up all over Nash City. As a member of the Elite Black Blade Guard, Fiona Moon is tasked with hunting down the most dangerous Paranorm criminals. Now she must find out who is kidnapping mages and sucking the life energy from their bodies. To make matters worse, she has to work with the one man that embodies everything she despises.

Ian Barroes is the rich founder and head of the Necromancers Guild and a professor of Necromantic Studies at the Academy of Science and Magic. There is one thing he wants more than anything else in the world… Fiona.

They each hold secrets that could destroy them but could also be the key to destroying the evil Voodoo priest, Bokor. They must learn to trust each other track down Bokor before more innocents are taken, and murdered. To make matters worse, when Fiona becomes a target of the evil madman she is lured into his trap. Now she and Ian have to fight for survival and their very souls.


And now for a sneak peek inside Voodoo Moon...


It only took Millie a few minutes to tally up the day's business and put the money in the safe for Mr. Fegley to find the next morning. She quickly wiped down the counters and made sure everything was tidy. She went into the backroom removed her apron and took a quick look in the mirror that hung next to the backdoor. Wisps and strands of tawny hair had escaped the ribbon she tied it back in this morning and formed a messy halo around her pale, freckled face. In the threadbare brown tunic and pants that were her normal work uniform, she looked drab and washed out. If she weren’t so clean she could almost be mistaken for a beggar. She swiped at her hair, but it did no good. No matter. She didn’t have time to pretty up and she wouldn’t be graded on her looks today, just her powers.

She jumped as the clock on the wall rang chimed the hour. She had less than half an hour to get across town in order to make the evening test. If she was even a minute late they would turn her away and she would have to wait six more months for another test date. Luckily she’d saved up a whole buck so she could take the trolley.

Being sure to lock the door behind her, she ran out into the early evening twilight. She just had a few minutes to make it two blocks over to the magi-trolley line. She glanced down the street. It was crowded with daytime shoppers hurrying home to dinner and the beginnings of night time shoppers coming out. Dusk and dawn was always the busiest time in this part of Old Nash City. The vampires who stayed out of the daylight to avoid severe sunburns and allergic reactions were venturing out and mingling with the norms and paranorms who had no such allergies to the sun. The shops and streets were usually crowded for the first hour or so past dusk.

Even as small and fast as Millie was, it would take her forever to slip through the crowd. She eyed the narrow alley to the right. The light from the blue tinged crystal street lights didn’t make it into the alley. It was dark and dirty and she hated walking through it even in the daylight, but she didn’t have much choice. Some things were just more important than her fear of the dark.


He leaned against the stone wall, deep in the shadows cast by the setting sun and the solar-crystal lights that illuminated the bustling street. This body was awkward and cumbersome. He’d used it too many nights now and it was starting to get stiff. He should have picked another for tonight’s hunt. No matter. He would pick another from his store tomorrow. But for now, he needed to find new food, another worthy enough to fuel his body and perhaps become a vehicle for his spirit.

He scanned the crowd using his second sight, his divine sight, to view the magical auras that pulsed around the unsuspecting people. They had no idea he was there, hunting, waiting for the perfect specimen. Of course, none of them had anything to worry about. Their auras were all dull and muddy. All no to medium powers. Not one bright aura in the bunch. Not one was worthy. He was just about ready to give up his search and move on to another street when a bright light caught his eye at the other end of the alley. He turned his full attention to the young girl moving down the alley quickly as if she were afraid. Her magic burned bright around her. Most people, common people, wouldn’t know what was inside the girl. But he did. Brilliant shades of purple and blue pulsed and shimmered around her. The colors of her aura were so dark and bright they were almost tangible. His fingers itched to reach out and touch it. She was brimming with untapped power. Oh yes, her power would be filling and delicious. She was worthy. He would have her. 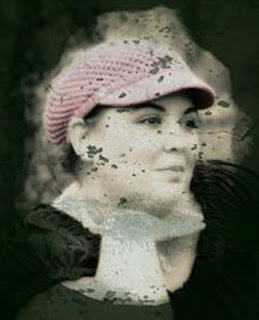 June Stevens, AKA DJ Westerfield is a wife, step-mom, sister, auntie, daughter, daughter-in-law, sister-in-law, friend, and Mommy to three adorable and mischievous four-legged babies. She writes non-fiction, blogs, and co-hosts an internet radio show as DJ Westerfield. She uses the pseudonym June Stevens to write fiction in a variety of genres including contemporary romance, romantic suspense, romantic fantasy, paranormal romance, urban fantasy. June Stevens creates new worlds in the form of short stories and books. When you step into one of June Stevens worlds you will encounter at least one (or a combination of many) of these elements: ROMANCE, mystery, suspense, magic, ghosts, vampires, witches, werebeasts, elves, faeries, other magical creatures, space ships, aliens, space travel, time travel, angels, demons, gods and goddesses, and who knows what else. If it can be dreamed up…it may be in one of her worlds.

a Rafflecopter giveaway
Posted by AJ Nuest at 8:46 PM

Thanks for being my guest today, June! I'm glad you're here!!

Thanks for having me! I'm so excited!