TRAILING KAIWULF IS AVAILABLE ON AMAZON!

TRAILING KAIWULF BY AWARD-WINNING KAYELLE ALLEN
IS OUT NOW FOR $0.99 ON AMAZON! 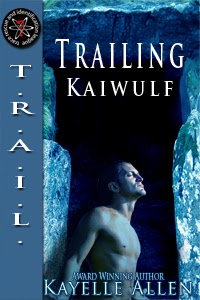 Find an invisible man in another dimension? All in a day's work at TRAIL.
Travel to a godforsaken planet on the outskirts of space. Check. Hold intrusive military types at bay. Check. Find an invisible man in a different dimension. Check. Finish out the vacation TRAIL yanked you back from to do it? Easier said than done.
Yanked back from their first vacation in ages, Jee and Dane get handed a top priority mission. The pay is better than any they've earned before as agents for the Trace, Rescue, and Identification League. With this much money, they might not need jobs. They're the best there is, and the item, person, or secret hasn't been invented that these two can't recover. Until now.
After all, how do you find an invisible man in another dimension? And who, exactly, is footing a bill this steep? Certainly not the archaeologist in charge. The military wants to get involved, but they have no monetary stake either. So who -- or what -- is behind the request to trail Kaiwulf?
BUY IT on AMAZON AND you can read the First Chapter FREE HERE!

The agency operates within the Terran Crescent, and the Colonies of Man, but has been known to venture into outlying areas. In Trailing Kaiwulf, they visit the planet Ust, a forgotten backwater planet close to the remnants of the Barrier.

The Barrier, a crumbling network of nav-scramblers set adrift in space, was originally designed to keep humans on this side of the galaxy, and non-human "gens" on the other. TRAIL stories will be set in various locations.

Chapter OneNew Braeswyck, Colonies of Man
TRAIL Field Office
January 24, 15128 AD (151.28.24 New Terran Date [NTD])
The com unit in Jeff Thompson's office crackled to life. "Security here. Jee arrived, boss, and you were" -- The sound of splintering wood followed --"right. Oh, man! There goes another door. What'd you do to her this time?"

Thompson disconnected. He activated the monitors on his wall and stood. TRAIL Agent Jee Tonopah might be the shortest agent in the company, but she had enough temper in her for half a dozen.

Jee and her partner, Dane Raphyel, had passed through every scanner in the building to get this far into the enclave, yet right there in plain sight on both their hips sat weapons. Fat lot of good TRAIL's security did. The guards outside his office backed away from the pair without a challenge.

"What am I paying you clowns for? At least slow them down. Cool her off!"

But no, the outer door to his assistant's office banged open and thumps sounded on the floor. The lamp on Thompson's desk shook as if Jee had an elephant with her. Dane dwarfed his partner.

"Computer, unlock entry door." Jee would kick it in if he kept it sealed. Last time it had taken months to ship in replacement parts.

The BioMate embedded in Thompson's arm flashed a warning about heart rate, so he tightened his grip on the stress-soother stone in his hand. All it did was bruise his palm. He flung the rock aside.

The TRAIL agents blew into his office like twin whirlwinds.

Thompson forced himself not to back away.

"How dare you!" Jee dumped a tattered knapsack onto the floor. She kicked the visitor's chair out of her way, then slammed her hands onto the desk and glared at him like a dragon ready to flame him into a puddle of blackened flesh.

Dane folded his arms and leaned against the door, blocking any escape it might offer.

Thompson eased around the desk to survey the damage. "Fight fire with fire," his therapist had told him. Time to put it to the test. He pointed at the splintered chair. "I paid six thousand sig-creds for that. It's eleventh kilo-century Terran."

Jee snorted. "If you paid that much for a four hundred year-old chair you got taken, Thompson. Beats me why you'd admit to being so stupid."

Thompson dug his fingernails into his palms. A month of stress therapy trashed after one minute with this woman. It's only money. He sucked in a deep breath, held it for a count of three and exhaled. "No matter. My assistant found a craftsman to repair that rare Fellsian vase you smashed six months ago. Maybe this can be fixed, too."

Jee flung dark curls out of her eyes. "Do you have any idea how long it took to get reservations on a first class sleepliner to Earth? How dare you call me back here? TRAIL doesn't own me, Jeff Thompson."

"I'd be half way there if it wasn't for you. How dare you cancel my leave? Who do you think you are?"

"Watch this holovid before you give me a definite no." Thompson initiated a life-sized holographic image of a youth.

"I'm not watching a thing. I..." Jee's voice faded as the holovid activated. "Whoa." She made a sensual growl, low in her throat. "Who is that?"

"Kaiwulf. Down, girl." He shot a knowing glance at Dane. "Excellent picture, isn't it? We don't get this quality too often."

The 30-second holovid flickered to a close and flashed the TRAIL logo, a white compass circling a red question mark, with the words Trace, Rescue, and Identification League around it.

"Give me that." Jee grabbed the remote and tapped it. The holovid played again.

A nude male stood with arms held out at his sides, head thrown back as if in ecstasy. Blue light played across the rippled muscles of Kaiwulf's torso and highlighted the flat planes of his belly. In the background sat a pair of white wolves. Kaiwulf jerked his head toward the holocam, and in one fluid motion, turned and walked away. The image faded.

The TRAIL logo and the case number re-appeared.

Thompson held up a packet. "I hold, in your name, a guaranteed voucher for first class accommodations at the Terran resort of your choice for two months, plus first class passage on a sleepliner, underwritten by the president of TRAIL and three board members. And for you, Dane, half a year's salary in advance. All you have to do is accept the job, which is to find this young man and bring him back to the people who want him."
~ * ~
VISIT KAYELLE'S LINK ABOVE TO FIND MORE OF HER FABULOUS TITLES!

Thank you so much for sharing my new book. :) I hope you enjoy the story!

Totally loved your excerpt, Kayelle! Very active and visual. Awesome job. Gee, now I'm going to have to have it.

Okay, you totally snagged my interest. Geez, my kindle is overheating! :-)

Thank you so much for stopping by today, Vonnie and Mac! You ladies ROCK! Whoot! x

Vonnie and Mackenzie,
Thanks so much for popping in. I'm glad you liked Kaiwulf. :)

Did you ever try to automate your free satoshi collections with a BITCOIN FAUCET ROTATOR?

If you are searching for the best bitcoin exchange company, then you should use YoBit.