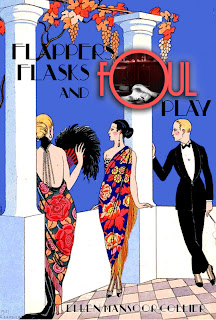 Boardwalk Empire meets The Great Gatsby in this soft-boiled historical mystery inspired by actual events. Rival gangs fight over booze and bars during Prohibition in 1920s Galveston: the Sin City of the Southwest. Jazz Cross, a 21-year-old society reporter, feels caught between two clashing cultures: the seedy speakeasy underworld and the snooty social circles she covers in the Galveston Gazette.

During a night out with her best friend, Jazz witnesses a bar fight at the Oasis--a speakeasy secretly owned by her black-sheep half-brother, Sammy Cook. But when a big-shot banker with a hidden past collapses there and later dies, she suspects foul play. Was it an accident or a mob hit?

Soon handsome young Prohibition Agent James Burton raids the Oasis, threatening to shut it down if Sammy doesn't talk. Suspicious, he pursues Jazz but, despite her mixed feelings, she refuses to rat on Sammy. As turf wars escalate between two real-life Galveston gangs, Sammy is accused of murder. Jazz must risk her life and career to find the killer, exposing the dark side of Galveston's glittering society.

Excerpt:
Why in the world was Agent Burton here? Everyone stopped working to watch him make his grand entrance. People don't usually parade around in a newsroom: They sort of shuffle or stumble or stomp—unless a story's really hot, then they'll run. I felt like running away too, but I stayed glued to my chair, pretending to work, my heart racing. What did he want from me?

Burton seemed to enjoy the attention as he headed my way. He was hard to ignore: Standing before me, all six feet-plus of golden skin and hair, he towered over my desk. Looking up, I noticed the curious eyes watching us in the too-quiet newsroom. The reporters stopped typing, fingers poised over keys, hoping for a scoop. My boss stared with unabashed interest.

"To what do I owe this disturbance?" I adjusted my cloche, acting nonchalant.

He grinned at me, then looked around the suddenly still office. "I need to ask you a few questions. Can we go somewhere private?"

"What do you want?" I put on a brave face so the newsboys wouldn't see me sweat.

Burton scanned the hushed room. "You really want to discuss it here, out in public?"

He had a point. Did I want the whole staff listening in on my private conversation? He probably wanted to discuss Sammy, who was no one else's business.

"Let's go outside," I agreed. Head down, I followed him past a leering Hank, feeling like a naughty kid going to the principal's office.

Nathan entered the newsroom, a camera slung over his shoulder, stopping to stare at Burton. "Jazz, is everything jake?"

"Everything's berries." I smiled to pacify him but, I admit, I had the jitters.

"I remember him. Your boyfriend?" Burton seemed amused.

"He's the staff photographer." I ignored his crack. "And a good friend."

Outside, I felt safe among the throng of people and automobiles passing by in a rush. The hustle and bustle of the streets and sidewalks seemed almost comforting. I looked around for Golliwog, our resident stray cat, but she must have been making her daily rounds for scraps.

"How was lunch?" In broad daylight, Burton didn't seem quite as menacing or intimidating. Besides, a group of hard-boiled reporters peered out the newsroom, spying on us.

"Fine." I covered my growling stomach. "What brings you here?"

"Sorry to barge in that way." He smiled, tugging on his hat. "But I had to get your attention. You wouldn't give me the time of day the other night."

"Can you blame me? A raid isn't exactly the best way to meet new people."

"I think we got off on the wrong foot." He stuck his hands in his pockets, jingling some change. "Perhaps we can talk over dinner, instead of standing out here on the sidewalk?"

"Dinner?" Was he serious? "Just like that?" I snapped my fingers. "You waltz in as if you owned the place—like you did at the Oasis—and expect me to dine out with you, a total stranger, because of your badge? You've got a lot of nerve, mister."

"I wouldn't be a Prohibition agent if I didn't." He looked smug. "How about tonight?"

"Tonight? I usually work late." I admit, I was curious. What did he really want?

"Every night?" He raised his brows. "Don't they let you off for good behavior?"

"For starters, I don't even know you and what I do know, I don't like at all." I squinted in the sun. "And I don't appreciate the way you bullied us at the Oasis. I thought people were innocent until proven guilty, not the other way around." I wasn't usually so bold and blunt with strangers, especially lawmen. Maybe it was his youth, or maybe I'd finally found my moxie.

"You must mean Sammy. Fair enough." He held up his hands. "If it makes you feel any better, my gun wasn't loaded that night."

"Small comfort now, after you scared everyone half to death." So it was all an act?

Burton looked down at his boots, as if reconsidering his options. "I hoped you could get to know me over dinner, but how about a quick bite now? I haven't eaten."

"Why not?" I nodded, not wanting to let on that I was famished.

Burton stopped at a sandwich vendor on the corner, and tried to pay for my lunch and Nehi, but I pulled out a quarter before he did. It wasn't a date!

"Where can we talk, in private?" He motioned towards the newsroom. "Away from prying eyes and ears."

Anxious, I led him towards a city park and we sat on opposite ends of a bench, my clutch bag like a barricade, keeping my distance.

"So what's the emergency? Why did you come by today, out of the blue? I hope I'm not under arrest!" I half-joked. 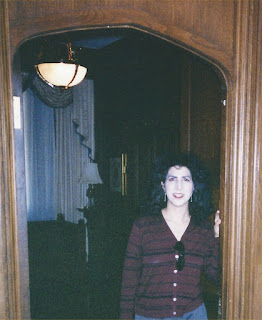 Ellen Mansoor Collier is a Houston-based freelance magazine writer whose articles and essays have been published in several national magazines including: FAMILY CIRCLE, MODERN BRIDE, GLAMOUR, BIOGRAPHY, COSMOPOLITAN, COUNTRY ACCENTS, PLAYGIRL, etc. Several of her short stories (both mystery and romance) have appeared in WOMAN'S WORLD.

A flapper at heart, she’s the owner of DECODAME, specializing in Deco to retro vintage items (www.art-decodame.com). Formerly she's worked as a magazine editor/writer, and in advertising sales and public relations. She graduated from the University of Texas at Austin with a degree in Magazine Journalism. During college, she once worked as a cocktail waitress, a short-lived experience since she was clueless about cocktails. Flappers, Flasks and Foul Play is her first novel, inspired by real people and places. Currently, she’s working on the sequel.

"When you grow up in Houston, Galveston becomes like a second home. I had no idea this sleepy beach town had such a wild and colorful past until I began doing research, and became fascinated by the legends and stories of the 1920s. I love the glamour and excitment of The Jazz Age, but Prohibition was also such a dark and dangerous time in American history. Jazz isn’t a debutante or socialite, she’s a reporter caught in between the two halves of Galveston society, struggling to do the right thing despite all the temptations and decadence of the era."

Find Ellen here at her: Website and on Goodreads
Posted by AJ Nuest at 8:00 AM

I love mysteries set in the 1920's. This sounds like one I have to buy. Thanks for sharoing.

Many thanks for featuring FLAPPERS today, AJ! Hope you enjoy it, Caroline! Best, Ellen

Great excerpt, love the guy asking for a date and her response!